The Journalistic Career of John Buchan (1875-1940) : A Critical Assessment of Its Context and Significance 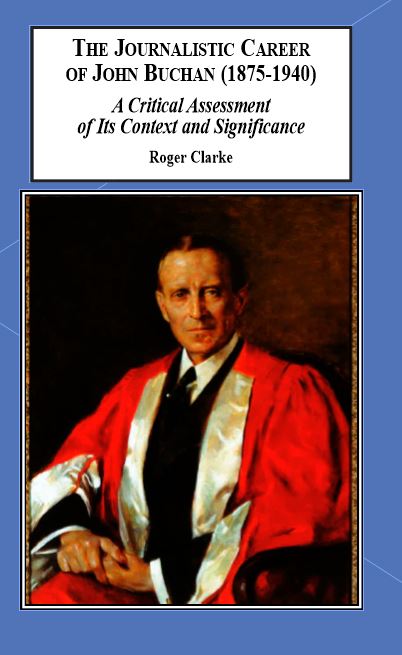 This book brings an academic focus to John Buchan's journalism for the first time. It breaks new ground by examining the style, structure, and content of his articles and reviews, arguing that Buchan should be considered an essayist of elegance and authority, an astute literary critic attuned to cultural trends, and a wide-ranging cultural commentator on his times.

"Although there has been considerably increased scholarly interest in Buchan's work in recent years, the perception that he is mainly a genre writer has persisted, so inhibiting the success of attempts to value his literary output more widely. While recent criticism has drawn attention to other key aspects of Buchan’s oeuvre, such as his historical fiction, biographies, or his record as a war correspondent and military historian, Buchan’s uncollected journalism has remained neglected, even by specialists. Roger Clarke now puts this right by showing how this significant body of work, hitherto incompletely documented, adds to our understanding of Buchan."
Dr. William Greenslade,
University of West of England

1978 - Function of the Masque in Jacobean Tragedy and Tragicomedy
2018 - A Bibliography of 13,632 Novels Written by British and American Women From 1500-1900: Listed and Cross-Listed by Birth Name and Married Name (Volume 2)
1991 - Study of Llewelyn Powys His Literary Achievement and Personal Philosophy
>> See all our English Literature books