The Aesthetic Life of Charles Baudelaire and His Influence on Oscar Wilde: The European Precursors of Spiritual Love 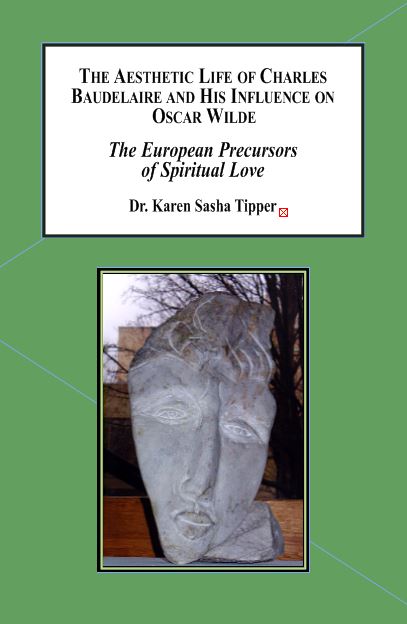 In this study, Dr. Tipper observes that there is a striking resemblance between both the lives and works of Charles Baudelaire and Oscar Wilde. The study compares the philosophical, artistic, and social backgrounds of the two writers and the personal aspects of their lives which caused them to live and to write in similar ways. Such resemblances naturally enhance the influence a writer has on a successor and this led Wilde to conceive of Baudelaire as a fellow genius and noble sufferer from whom he could borrow some ready-made splendor.

"... since the little substantial research has been connected on this important and fascinating topic, so exemplary of the trans channel connections affecting the Aesthetic Movement. Thus it is a topic that needs to be more fully explored and the psychological theories that were prevalent in the 1970's and perhaps applied to glibly adjusted to accommodate present day views. ... [this book] should serve as a valuable resource for anyone wishing to undertake a fresh analysis of the lives and works of Baudelaire and Wilde to determine the nature and extent of the influence the French poet had on the Anglo-Irish writer."

Introduction: The Philosophic Background of the Aesthetic Beliefs of Charles Baudelaire Oscar Wilde

Chapter I: Charles Baudelaire: Parental and Early Environmental Influences on his Character and Evolution as a Critic and Poet

Chapter III: Oscar Wilde: Parental Influences on his Character and His Development as a writer that Parallel those of Baudelaire

Chapter IV: Wilde: Master of Form, The Secret of Life

Chapter VI: The Aesthetic Beliefs of Wilde that Parallel those of Baudelaire

2014 - Nine Writers of Postmodernist Metafiction: Explaining the Literary Tricks that Undo Realistic Discourse
2012 - Empathetic Literary Analysis of Jack London's the Call of the Wild: Understanding Life From an Animal's Point of View
2018 - The Love of Parents for Their Children as the Foundation of a Just State: Close Readings of Plato's Republic and The Book of Job
>> See all our Literary Criticism books