The Spiritual Disorder of the Jews and the Need for a Zionist Renaissance: A History of the Ongoing Debate 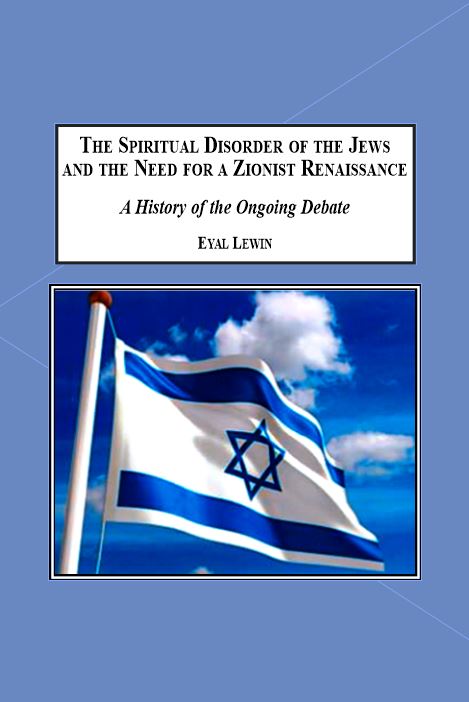 Dr. Lewin examines what he believes to be a spiritual disorder at the core of Israel and the many ways that the disorder is expressed. He focuses on a diverse collection of incidents and events that have manifested in modern Israel due to this disorder. The book looks to examine the concerns and offer solutions that would combat the malaise he is diagnosing.

"Based on numerous other examples throughout history this study asserts that just like other cases –self-degradation was the major motivation dictating Israeli responses, particularly those of intellectuals, scholars, journalists and artists. As will henceforth be shown the description of collective self-accusations is merely a minor occurrence of a larger, more important and more dangerous phenomenon: The Disorder of Jews. ... Beyond just diagnosing a collective mental malady, this study aims at proposing an appropriate prescription. In this sense, it is the aspiration of this book not to remain solely academic, but to create a framework for ensuing essays and theories of political thought."

Chapter 3: The Disorder of Jews in the West

Chapter 4: The Disorder of Jews in Israel

Chapter 7: The Causes of the Disorder of Jews

Chapter 9: Insights from the Cockpit

2001 - Adolescent Fear of Crime, Perceptions of Risk, and Defensive Behaviors. An Alternative Explanation of Violent Delinquency
2018 - How 300 Idealistic Young Germans Fought to Liberate the Greeks From 500 Years of Muslim Tyranny: A Novelistic History of the Greek War of Independence (1821-1832)
2018 - The Akorino Church in Kenya: An Indigenous Original Pentecostal Church
>> See all our Social Science books

2017 - Blaming Jews for Acting Like Nazis: The Rhetoric of Holocaust Inversion (hard cover)