Blaming Jews for Acting Like Nazis: The Rhetoric of Holocaust Inversion (hard cover) 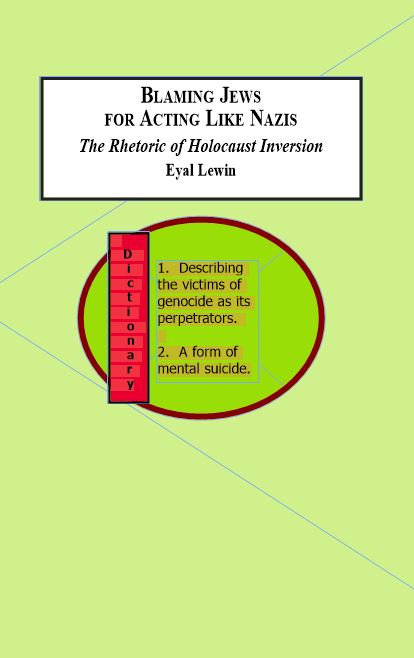 This essay concentrates on the strange occurrence of Jews whose legacy is the comparison of Israelis with Nazis. This tendency is becoming prominent among Jewish Western intellectuals, involving artists, scholars, journalists and politicians. Nonetheless, the Israeli-Nazi comparison is prevailing also within the higher echelons of Israeli society. The stated goal of this paper is to portray this strange phenomenon – later to be defined as Jewish Holocaust Inversion – and to comprehend the dangers that it poses to Israeli society and to the Jewish people.

"However, the Holocaust Remembrance day of 2016 marked a change in Israeli society. In one of the major official ceremonies, Major General Yair Golan, the Israeli deputy chief of staff, gave a bombshell speech when he said:

[…] If there is one thing that is scary in remembering the Holocaust, it is noticing horrific processes which developed in Europe – particularly in Germany – seventy, eighty, and ninety years ago, and finding how they begin to unfold here among us in the year 2016 (The Jerusalem Post, May 5, 2016)

As this research will demonstrate, Golan was certainly not the first Jew to compare Israel with Nazi Germany; moreover he was not the first Israeli leader to do so. However, the uniqueness of the May 4, 2016 event was that on what can be counted as the holy of holiest day in Israeli civil life, an IDF leader, upon officially representing the State of Israel, announced that Israel could be compared, on moral grounds, with the Third Reich. Leaving no doubt that he was actually comparing the State of Israel with the Weimar Republic and its successor, Golan pointed out that he was referring to ‘phenomena that are disruptive’ and to ‘signs of intolerance, violence, self- destruction that arise on the path to moral degradation’ (The Jerusalem Post, May 5, 2016). "

Chapter 1: A Working Definition of Anti-Semitism

Chapter 7: The Rank and File of the IDF

1992 - Post-War Riots in America, 1919 and 1946. How the Pressures of War Exacerbated American Urban Tensions to the Breaking Point
2017 - A Feminist Theory of Motherhood: The Desire of Women (hard cover)
2000 - Caste and Class in India in the Late 20th Century
>> See all our Sociology books

2018 - The Spiritual Disorder of the Jews and the Need for a Zionist Renaissance: A History of the Ongoing Debate