Textual Representations of Works of Art in Three Spanish-American Novels: Images of Opposition and as Corroboration of Words 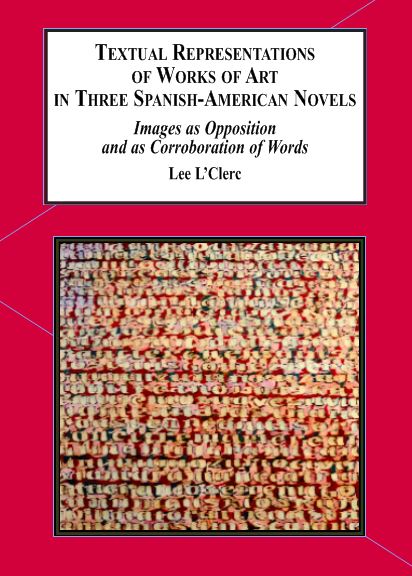 This work examines how, in the interaction between text and image, the pictorial becomes contextualized to serve the purpose of the text. It shows how the pictorial serves as source of knowledge that generates new meanings and broadens the reading perspective of the novels. The goal is to eschew an approach that would analyze works of art according to the intentions of the artist or would produce a "proper" contextualization of works of art. the text includes ten black and white photos.

"It is an interdisciplinary study that offers a broad and in-depth understanding on how pictorial representations interact with fictional narratives. L'Clerc focuses his study on iconography and semiotic notions of visual representations along with concepts from post-structuralism and reception theories." Professor Rosa Sarabia, University of Toronto

"... is a splendid, valuable and interdisciplinary contribution to three scholarly fields: the 20th century Latin American novel; literary -visual theory; and visual-textual relations. Following the footsteps of Lessing, Dr. L'Clerc's study attempts a 21st century laokoon. By means a series of fine analyses of the word/image relation that is fundamental to the novels in questions, it speaks equally and meaningfully to each of these discursive communities and articulates how their concerns overlap and inform each other." Dr. Colman Hogan, Ryerson University

Chapter 1: In Lieu of a Theory: Addressing the Silent Work of Art