What Makes Galicia a Nation? Postcolonialism and Subalternity in Alfonso Rodriguez Castelao 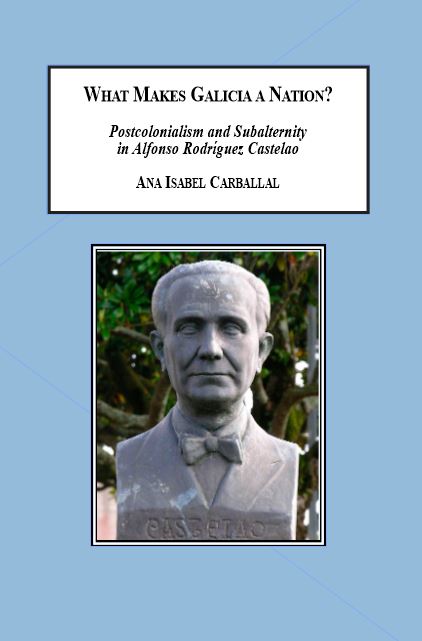 This book studies the notion of the subaltern in the work of Alfonso Rodriguez Castelao. Although approximately three thousand books and essays have been written about Castelao's work, this study is the first to link his literature to the field of postcolonial studies, and in particular to the postcolonial subject. Castelao had a complex life, and his work has received much analysis and criticism from all ends of the political and academic spectrum. Castelao was the most important writer whose work analyzed the consequences of Galicia's position as a colony inside of Spain, regarded Galicians as the first casualties of this situation, and pointed out the mounting number of problems resulting from it.

"Dr. Ana Carballal makes an honest, detailed effort to identify the interweaving of threads and levels of this important cultural thinker and, in doing so, reveals to us the daunting complexity in his life as well as his work. ... It is a long overdue effort, joining some more recent English translations of his writings, to create awareness of his ideas for cultural scholars of the English-speaking world."
Professor Emerita Kathleen March,
University of Maine

"One of the author's original contributions is that the work of Castelao is very relevant because it goes beyond the predominant cultural practices of the subaltern in Galician society. Castelao's unique perspective on articulating a Galician nationalism is still today a matter of debate and reviewing historical formulations of nationalism."
Dr. Laura Lopez Fernandez,
The University of Waikato

I. Galicia as a Colony

II. Living and Operating inside the Colony

III. The Postcolonial Condition of the Galician Nation

V. Conclusion: "The Burden of this Colonial State"