Palisades Island: A Translation of Insel Felsenburg by J.G. Schnabel 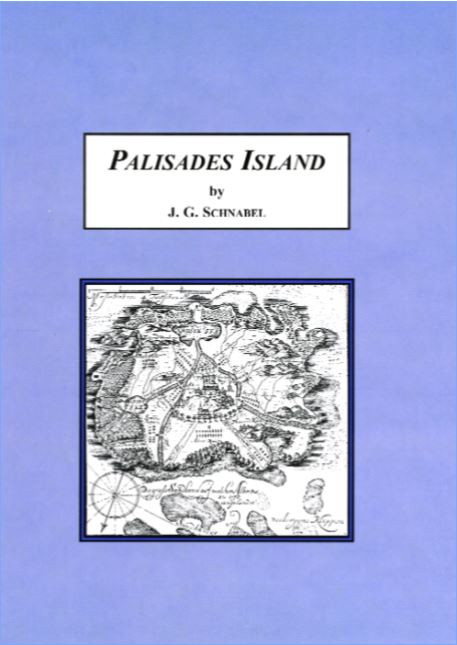 Novel is a translation of the German book known as Insel Felsenburg originally published in 1731. Its narrative was first suggested by Daniel Defoe's Robinson Crusoe (1719). This German version presents a man and woman shipwrecked on an island in the South Atlantic. They marry and with their children establish a utopian society.

"Fifty years after that 1828 edition, a leading specialist in literature of the German Enlightenment, Hermann Hettner, supported Tieck's efforts to rejuvenate Palisades Island. Calling the novel one of the most and important works of its age, Hettner finds that it contains both a 'longing for originality and nature' and a 'cry for freedom' worthy of Friedrich Schiller. He goes on to declare that Palisades Island is 'Rousseau before Rousseau'."

The Story of Eberhard Julius

The Story of Captain Wolfgang

The Story of Albert Julius

The Story of Judith von Manders

The Story of David Rawkin

The Story of Virgilia von Cattmers

The Story of Captain Wolfgang, Continued

The Story of Master Schmelzer

The Story of Litzberg, the Mathematician

The Story of Kramer, the Surgeon

The Story of Plager, the Machinist

The Story of Lademann, the Joiner

The Story of Kratzer, the Miller

The Story of Herrlich, the Turner

The Story of Peter Morgonthal

The Story of Franz Martin Julius

The Return to Palisades

And the Death of Patriarch Albert Julius

2022 - Two Tragedies by F.M. Klinger in English Translation: A Suffering Woman and A Second Arria
2022 - The Voyage of an Earth Inhabitant to mars (1790)- hard cover
2020 - Julius of Taranto by J.A. Leisewitz and The Twins by F.M. Klinger: Two Tragedies of the German Sturm und Drang Theater
2019 - Country Pastors by J.C. Kruger and Good Women Triumphant by J.E. Schlegel: Two Comedies of the Early Enlightenment
2018 - Two Plays by Christoph Martin Wieland in English Translation: Lady Jane Grey (1758) and Clementina of Porretta (1760)
2013 - Fables and Tales by the German Aesop, C.f. Gellert (1715-1769): A Moral Teacher of the German Nation