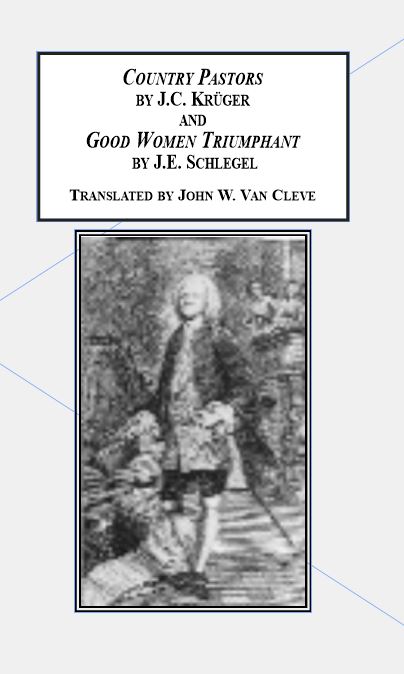 The plays in this volume are from the 1740s. Works from the early literary Enlightenment respond not only to the demand of educated people for rational responses to real-world situations but also to a new desire within the developing middle class to read about recognizable joys, sorrows and tensions within families and between husbands and wives. The audience for this literature held those expectations, and playwrights tried to satisfy them on the contemporary stage.

"The plays in this volume are from the 1740s, a decade during which German letters were also responding to the effects of a contemporary spiritual movement, Pietism. Their numbers growing within or alongside institutional Lutheranism, Pietists attended private devotional meetings that supplied mutual support for the direct expression of an overtly emotional faith not constrained by either dogma or clerical hierarchies. The new freedom in emotional expression found its way into the literature of the 1740s as a tendency usually described as Empfindsamkeit ("Sentimentality"). Works from the early literary Enlightenment therefore not only respond to the demand of educated people for rational responses to real-world situations ."
From the Translator's Preface

2015 - I Married You for Happiness by Natalia Ginzburg; two Women From the Provinces by Dacia Maraini: Two Women Playwrights. a Translation From Italian Into English
2012 - Transitions in Italian- American Immigrant Theatre 1746-1899: Transients to Residents - Vol. 7
1994 - Garrick, Arne and the Masque of Alfred a Case Study in National, Theatrical and Musical Politics
>> See all our Theater books

2022 - Two Tragedies by F.M. Klinger in English Translation: A Suffering Woman and A Second Arria
2022 - The Voyage of an Earth Inhabitant to mars (1790)- hard cover
2020 - Julius of Taranto by J.A. Leisewitz and The Twins by F.M. Klinger: Two Tragedies of the German Sturm und Drang Theater
2018 - Two Plays by Christoph Martin Wieland in English Translation: Lady Jane Grey (1758) and Clementina of Porretta (1760)
2017 - Palisades Island: A Translation of Insel Felsenburg by J.G. Schnabel
2013 - Fables and Tales by the German Aesop, C.f. Gellert (1715-1769): A Moral Teacher of the German Nation