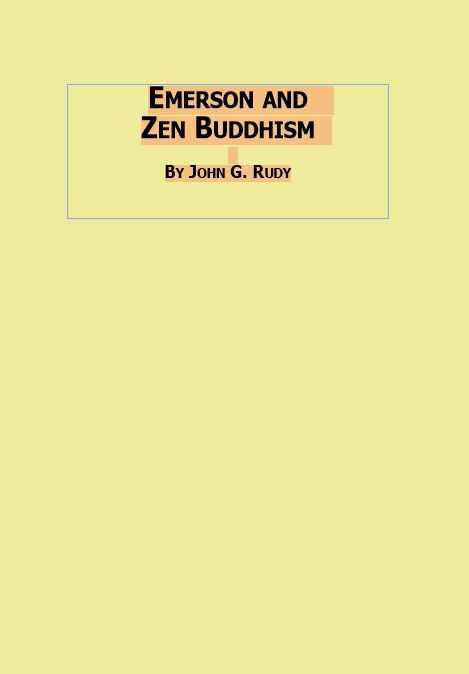 This study demonstrates that Zen and Emersonian texts provide a mutual generative context for engaging the meditative dynamics of voidist spirituality. Combining methods of modern literary scholarship with the philosophical initiatives and the meditative practices of Zen Buddhism, the text crosses disciplines as well as cultures, offering a nonmonotheistic, nonpatheistic discursive ground upon which to study what Emerson calls "spiritual emptiness."

“John G. Rudy’s study of Emerson and Zen is an accomplished and important contribution to our understanding of the interplay of the work of the New England Transcendentalists of the nineteenth century with the Zen spirituality. While Professor Rudy is attentive to the impact of Eastern religious texts on Emerson and other Transcendentalists, he does not offer an influence study here. He is instead concerned with the ways that Emerson’s philosophical and spiritual concerns overlap with Zen, and with the ways that Zen can help us to understand the nature of Emerson’s work. . . . is well-grounded in Emerson’s primary texts and is extremely informative about the development and interpretation of Zen. He has an impressive command of the difficult concepts at the center of Zen discourse, and is able to explicate those fully and meaningfully. . . . a very accomplished and very informative study, and believe it will be of interest to modern readers of Emerson and the New England Transcendentalists.” – David Robinson

“His telling comparisons speak for themselves as they epitomize a large body of writers who have in effect been sending messages across the Pacific for centuries. . . specifically he shows, point for point, how both the Zen master and the American transcendentalist climb the same mountain on different paths, in order to reach the summit of experience where all dualities vanish yet survive in an eternal present.” – Raymond Tripp