PASSION AND PARADOX IN GEORGE HERBERT'S “THE SACRIFICE” A Close Reading 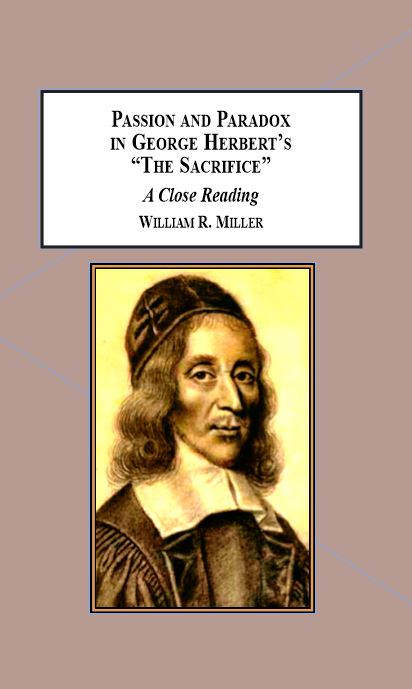 This book is the fourth poem in Welsh-born poet George Herbert's (1563-1633) major poetic work The Temple (1633). Structured as a interrogative, this dramatic monologue allows Christ to speak from the cross.

"The paradox of his (Christ's) two natures, human and divine, compels the reader to listen to the story of his side of human history. The four-line stanzas end with the haunting refrain, 'Was ever grief like mine?"
... The most compelling aspect of Herbert's genius in the poem in his direct appeal to the reader - his true audience in the seventeenth century as well as our own. Christ asks us to listen and decide who he is, what he lived and died for. We need to also address the conflict in our own hearts between flesh and spirit.
From the Abstract

"Most important of all, it is a self-contained poem which can be read outside of knowledge of Herbert's poetry. By allowing Christ to speak in his own voice, Herbert gives us insight into the conflicted character of a figure often shrouded in mystery. The reader suffers with Christ in this slow-paced, elegiac masterwork. The irony of what it means to be human and divine is realized in stanza after stanza. ... 'The Sacrifice is the compelling introduction to Herbert's The Temple. It is also the greatest example of the dramatic monologue in the 17th century. In many ways it prefigures the form itself as realized in the poems of Burns, Browning, and T.S. Eliot.
From the Text