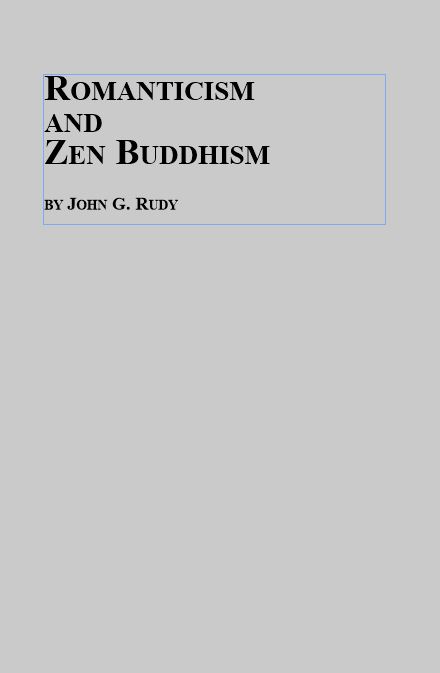 Critical discourse on Romanticism is grounded in an idiom of subject and object that avoids the literature’s drive to establish an alternative to the self-other dualism at the base of Western culture in general. This study offers an alternative way of reading Romantic texts, one predicated not on the assumption of a self to be affirmed, negated, or transcended but on the Zen Buddhist understanding that “The true Self is no-self” and that “Self-nature is no-nature”. The functional ethos of much Romantic writing, like the meditative dynamics of Zen Buddhist practice, entails the retrieval of a unitive, originary ground prior to all notions of selfhood. Accessing this ground follows patterns of meditative emptying by which individuals relinquish the compulsion either to assert independence through radical emphases on difference or to establish unity through variant modes of bridged togetherness. The result is neither subjective nor objective. It is, rather, an opening process that reveals how each thing in nature is both an autonomous unit of codependent activity and a holistic manifestation of ultimate reality. Reading selected British Romantic poems in the mode of self-emptying offered by Zen Buddhist meditative practice illuminates an alternative spiritual potential in Western literary engagement, moving individuals from a realm of understanding expressed in terms of a systematic grasping for intellectual and emotional straws to a process of awakening based in patterns of continual opening upon the grounds of a shared preconceptual nature.

“John G. Rudy has in earlier books addressed the relationship of Zen to Wordsworth and to Emerson. In the present work he looks at the broader topic of Zen and romantic poetry. This is a fruitful juxtaposition, enhancing one’s appreciation of both Zen and romanticism…..Professor Rudy is, as one would expect of a teacher of English literature, thoroughly at home with the romantic poets. It is a pleasure to discover that he is also well-informed about Zen, both the classical texts and the secondary literature. But it is an even greater joy to find that he is also in harmony with the spirit of Zen. The reader of this book will gain a fuller appreciation both of the romantics and of the Zen masters. Perhaps the reader will also come to realize that way of seeing which both Zen and romanticism share.” – Hall Peebles, Professor of Religion Emeritus, Wabash College

“The book will address important issues in British and American Romanticism from a perspective informed by the traditions of Zen Buddhist philosophy and literature…..The excellence of Dr. Rudy’s scholarship is affirmed by peer review, and is evidence that his work is important and worthy of support.” – Dr. Susan Scaime-Giesecke, Chair, Humanities Department, Indiana University Kokomo

“Professor Rudy’s research [is] both sustaining and inspiring, and I recommend this without hesitation and with considerable enthusiasm.” – Mark Lussier, Associate Professor, Arizona State University

Table of Contents:
Foreword, Preface
Preliminary Remarks
Acknowledgements
Introduction
1. The Heart of Emptiness: A Textual Consideration
2. The “Mind” of Emptiness: Shelley and the Ravine of Arve
3. Unveiling the Original Face
4. Blake and the Void of Koan Practice
5. Coleridge in Mokush?
6. An Aesthetics of Thusness
7. Keats and the Mind of Autumn
Conclusion
Notes
Bibliography
Index

2012 - Tibetan Buddhist Approach to International Relations. The Teaching of the Dalai Lama
2008 - Christian, Buddhist, and Confucian Protests Against Military Bases in Okinawa: A Study of Seven Religious Leaders
2010 - How Soka Gakkai Became a Global Buddhist Movement: The Internationalization of a Japanese Religion
>> See all our Buddhist Studies books