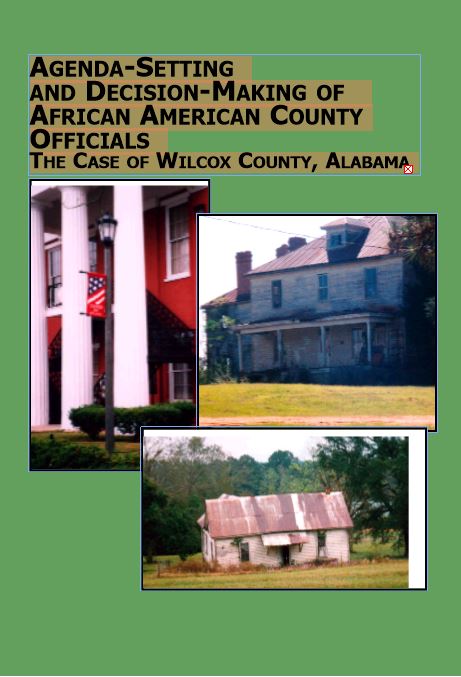 Provides insight regarding the manner in which African American county officials, most distinctly in rural communities that have predominant black population, set their political agenda and make decisions. It is unique in that the author, because of her work in the community and extensive fact-to-face interviews conducted, is able to present the voice of the African American county officials. Additionally, the study examines the traditional models of black political thought that have informed the agendas of most African American leaders in this country. It brings to light the extreme barriers that the officials are up against to improve the lives of blacks in the rural southern community.

“…a valuable and welcome study of a subject that receives far too little attention by scholars, policy-makers, and the concerned public. Dr. Jett’s analysis combines both a rich and detailed case study of a particular rural setting, Wilcox County in western Alabama, with a broader theoretical appreciation of how the challenges facing African American public officials there reflect a long and ongoing dialogue with the African American community over strategies for promoting political and social progress. Focusing particularly upon the debate between W. E. B. Dubois and Booker T. Washington early in the twentieth century, she identifies three competing yet somewhat overlapping traditions in African American political thought: nationalism, liberal integrationism, and radicalism. Based upon several years of field research and in-depth structured interviews with thirteen political and community leaders in Wilcox County, Dr. Jett describes how these leaders attained power during the turbulent 1970s and early 1980s and how they now seek to promote community development….By providing such a nuanced and detailed analysis of a single social and political setting, Dr. Jett is able to bring her analysis alive by introducing us to several inspired political leaders who have both lived history and expanded the horizons of African Americans in Wilcox County.” – Cal Clark, Auburn University

Table of Contents:
Preface
1. The Civil Rights Movement: The Difficulty of Transforming Political Victory into Socioeconomic Change (The Civil Rights Revolution – Political Victory, Economic Malaise; Traditional Tenets of Black Political Thought; Racially Distinctive Political and Educational Communities)
2. An Overview of Wilcox County (Underdevelopment of Wilcox County and the ‘Black Belt’; Barriers from a Legacy of Racial Polarization; Growing Tradition of Progressive Efforts; Current Political Leadership Status)
3. Problems and Stagnation in the Alabama Black Belt (Issue of Rurality; Socioeconomic Disparities between Blacks and Whites in the Rural South; Racial Discord and the 1960s Civil Rights Movement)
4. The Debate over Strategies for African American Advancement between Booker T. Washington and W. E. B. DuBois (African American Ideologies and the Debate; The Old “New Negro”; Booker T. Washington; W. E. B. DuBois; Building on the Tradition)
5. Methodology
6. The World of African American Officials in Wilcox County (Community and the Civil Rights Revolution; Using Political Power to Meet the Challenge of Social and Economic Development; Groping toward a Strategy and Decision-making Style in the More Complex Environment; Casting the Results in the Framework of the Tradition)
7. Conclusion: Struggling to Effect Real Change (Proposed Policy Agenda for African Americans in Wilcox County)
Appendix A.: Description of the Officials: County Commissioners; Law Enforcement-Related Positions
Appendix B: Interview Structure
Bibliography; Index

2004 - THE IMPACT OF AFRICAN-AMERICAN ANTECEDENTS ON THE BAPTIST FOREIGN MISSIONARY MOVEMENT (1782-1825)
2010 - African American Quest for Institutions of Higher Education Before the Civil War: The Forgotten Histories of the Ashmun Institute, Liberia College and Avery College
1992 - Comparative Study of Occupational Stress in African American and White University Faculty
>> See all our African-American Studies books