African American Quest for Institutions of Higher Education Before the Civil War: The Forgotten Histories of the Ashmun Institute, Liberia College and Avery College 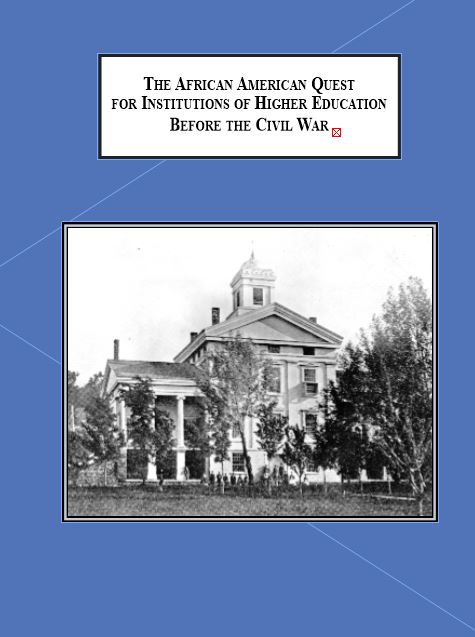 This study advances the understanding of black education during the antebellum era. It investigates the important ideological divisions that drove access to higher education for African Americans : the African Colonization Movement (A.C.S.), 1817–1862; and the Abolitionist Movement, 1830–1865. This study also provides some of the actual histories of those individuals who succeeded in obtaining an education as well as the histories of the institutions that served them. This book contains nineteen black and white photographs.

“Irvine has given us more original insights into the history of education than I have seen in the scholarship of the last decade. Most of our colleagues are revising old narratives and revealing new details along the way; Irvine has opened an entirely new frontier filled with new actors. He has given us new leverage on early black education that is refreshing and exciting.” ­- Prof. Ronald E. Butchart, University of Georgia

“. . . offers readers a splendid analysis of the struggle faced by African-Americans, who saw the necessity of educating themselves. . .Irvine's study does much to redress the imbalance to our knowledge of ante-bellum educational history.” ­- Prof. Roland M. Baumann, Oberlin College

"In this book, the black silence is broken and the colonization schemers unmasked. In both the quality and quantity of the data, Dr. Russell W. Irvine reinvents our understanding of blacks and higher education in the 19th century. It is an extraordinarily important book for any scholar of American educational history to read." - Prof. Vanessa Siddle Walker, Emory University

"[This] book challenged a number of myths regarding Black intellectual capability. [There] were disproven with the cohesiveness of the collection of facts. [The author's] of the American Colonization records unveiled the predecessor of information of African American history. We know know where we are now but truly never had the opportunity until now to know how we got there. [The author] shines a light on the little-known historical facts." -- Prof. Mercedes E. Banks, Howard University

2009 - Effort to Create a National System of Higher Education in Great Britain, 1850-2010. The Conflict of State Regulation and Academic Autonomy
2007 - Diversity and Change in Institutions of Higher Learning: A Case Study of Educators in the Canadian University College System
1998 - Community College Education and Its Impact on Socioeconomic Status Attainment
>> See all our Higher Education books