The Law of War and Peace in Islam: Causes and Conduct of Jihad and Non-State Islamic Actors under Islamic Law 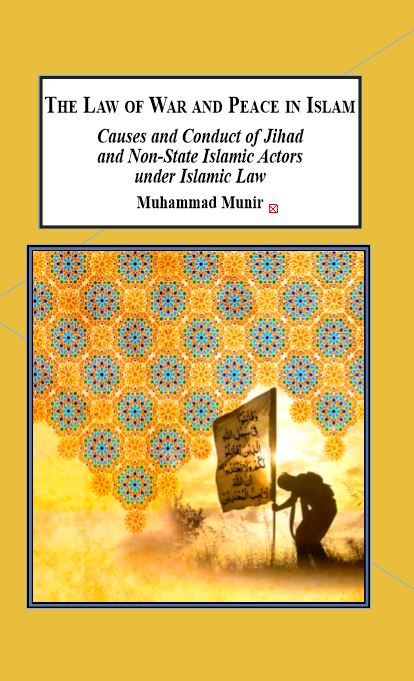 The concept of jihad has been the subject of vigorous academic writings since 9/11. Literature on jihad in most cases suggests that the phenomenon has been misunderstood and distorted. The self-declared jihadi organizations, or non-State Islamic actors, have abused the doctrine of jihad. Consequently, a common man's perception of Islam is to judge it to a large extent through his view of actions of the non-State Islamic actors such as al-Qa'ida, Daish, Boko Haram, or local jihadists organizations such as the Taliban rather than by the principles of Islamic law.

"[A] book such as this is so important to remind whoever wants to be reminded of the limitations on the use of force under Islamic law. Professor Munir follows a classic approach to Islamic law, always careful and cautious to remain within the mainstream of Sunni thought in the Hanafi tradition. His book is an important addition to the literature on the subject and it will hopefully contribute to a better understanding of Islamic law, at least to English reading audiences."
Professor Emeritus M. Cherif Bassiouni,
DePaul University

"What distinguishes this work from all the others is its all-embracing approach and depth of its analysis. The author's profound knowledge of the Islamic law and his command in the Arabic, Urdu and English languages, combined with his conspicuous capability of penetrating into the difficult Islamic legal texts that have resulted in a scholarly text of high international standard."
Professor Said Mahmoudi,
Stockholm Universitet

Chapter 2: The Causes of War in Islam: Infidelity or the Defence of Faith

Chapter 4: The Law of Treaty in Islam in Relation to War and Peace

Chapter 5: The Protection of Civilians in War: Non-Combatant Immunity in Islamic Law

Chapter 6: The Protection of Prisoners of War in Islam

Chapter 7: The Prophet (peace be with him)'s Merciful Reforms in the Conduct of War: Prohibited Acts

Chapter 10: The Code of Conduct for the Fighters or the 'La'ihah for Mujahidin': (Mis)interpreting Humanitarian Rules

1997 - Bibliography of the Myth of Don Juan in Literary History
2008 - The Scandinavian Magic Tale and Narrative Folklore: A Study in Genres, Themes, and Sources
2003 - World History and Myths of Cats
>> See all our Mythology books