Religion and Politics in Nineteenth-Century Britain: Secularism, Conservatism, and Anti-Semitism 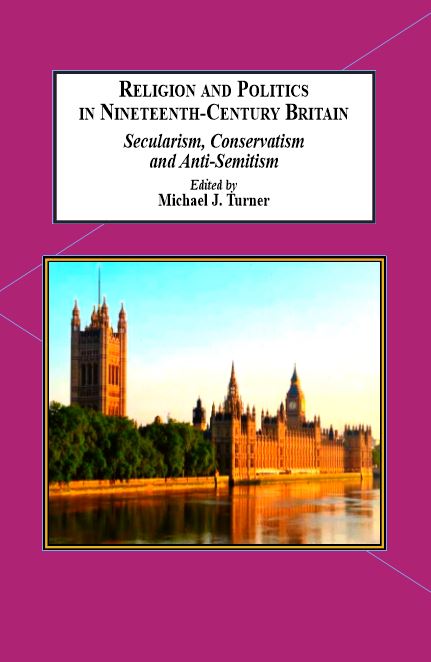 This volume of essays is a mediation of the status of religion and politics in Nineteenth century Britain. It is based on a panel on the subject at the North American Conference on British Studies and brings together six academic experts on the subject.

"Over the past fifty years or so, one of the most significant shifts in the historiography of modern Britain has been the tendency among scholars to diminish the role of religion and in some cases even remove it altogether from their explanatory frameworks. In what has become-to many-a secular and 'post-Christian' age, the appreciation of religious faith as an identity, a motive force, and a basis for relationships and ideology has grown more difficult. Unquestionably, it is less fashionable than it once was. The present volume is offered as a reminder that religion really mattered. From the specific people, places, and periods studied in these essays, much can be learned about the nature and influence of religious belief in Britian;s past, with particular focus on the ways which nineteenth-century British politics were directly affected."
From the Introduction

2. "Mr. Muddlepool the Moralist": Lord Liverpool, The Church of England, and Political Stability in a Turbulent Age, William Anthony Hay

3. Anti-Semitism in the Chartist Movement: Rife or Rare?, D.G. Paz

4. Connections between English Churchmanship and American Episcopalianism during the American Civil War: Beresford Hope and the New Organization of Our Communion", Michael J. Turner

5. The Secular Foundations of the State: The Peculiar Secularism of British Liberals since 1815, William C. Lubenow

2021 - Le corps-á-corps de l’abbé Richalm de Schöntal avec les demons (A Case of Combat against Demons in a 13th Century Monastery)
2021 - Spiritual Accompaniment and Marginalization in the Vincentian Tradition (Softcover)
2017 - Vlfberht, The Sword Master: A Re-evaluation Based on 9th-11th Century Swords with the Signature Vlfberht on the Blade and on Contemporary Written Sources
>> See all our History-Europe books

2021 - The Late Victorian Controversy about Hell, Judgment, and an Intermediate State
2017 - Churchmanship and Education Reform in Victorian Britain: The Case of A.J. Beresford Hope