Last of the Mohicans and Five Film Versions 1909-1992: Narrative, Trauma, and Typology 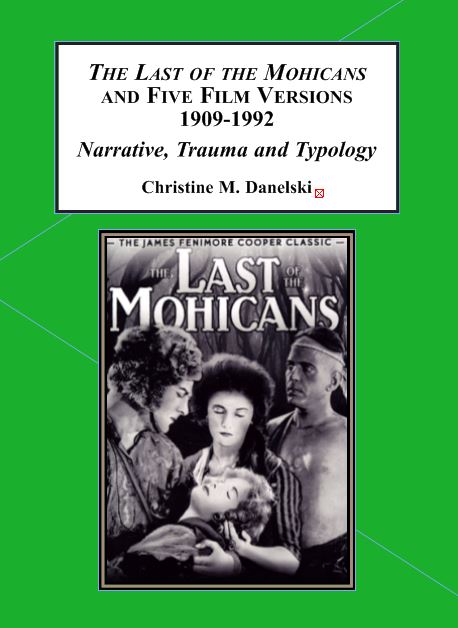 This study compares The Last of the Mohicans by James Fenimore Cooper with five of its filmed versions. These comparisons demonstrate and comment upon how American ideas about race and gender have been constructed and reconstructed since the nineteenth century. This historical and cultural analysis tracks the colonial and national treatment of Native Americans, the development of the Hollywood studio feature and how colonialism, masculinity and race are depicted and re-enacted in these six texts.

This work presents a detailed look at social and cultural elements in multiple chronological moments as they are expressed against the backdrop of a single narrative: James Fenimore Cooper’s The Last of the Mohicans. Dr. Danelski addresses ways in which repetitive filmic retellings of this story demonstrate efforts to synthesize aggressive and traumatic events, specifically those related to the U.S. history of genocide against Native Americans and secondarily chattel slavery of Africans.”
-Professor Denise Mary MacNeil,
University of Redlands

“Professor Danelski’s book provides a comprehensive look at the complexities of America’s national identity and how Cooper’s fictional account both incorporates and shapes that model. Looking at Native American and Black American histories, she clearly analyses the destruction and displacement of the former cultural group while connecting to the traumas of slavery of the latter ethnic group. Her astute understand of American history provide a foundation for her specific look at Cooper and Hollywood’s presentations of that history and the resulting influence in shaping the national identity and attitudes towards race, ethnicity and race relations...In short, Professor Danelski’s book contributes to the body of studied materials on American race relations; Hollywood’s inextricable link between politics, art, and commerce; cinematic decision-making processes; and the powerful ways in which cinema communicates to viewers.”
-Professor. Melvin Donalson,
California State University, Los Angeles

“From a scholarly perspective, one of the most original and unique aspects of the book is the way it weaves together theory and history, two ways of thinking that are more usually kept separate – to the detriment of both, I might add. Theoretical discussions of trauma and typology are very rich in their own right and bringing them together is already a major theoretical breakthrough. Bringing them to bear on our reading of U.S. History is utterly brilliant...this is the most important book I have read in a very long time. The attention to off-screen as well as on-screen personas and the flows between them, the powerfully meticulous archival work on the networks of personal and professional relationships involved in the construction of Hollywood images, the profound respect for all aspects and participants in film making as well as the understanding of American film audiences, the masterful braiding together of literary, historical, media, and gender discourses – all these and the many further dimensions of this book make it an epic narrative in its own right.”
-Professor Marguerite Waller,
University of California, Riverside