How 300 Idealistic Young Germans Fought to Liberate the Greeks From 500 Years of Muslim Tyranny: A Novelistic History of the Greek War of Independence (1821-1832) 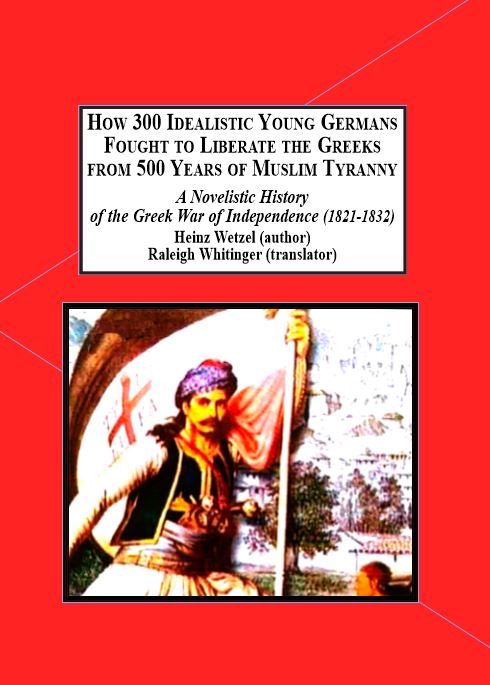 This historical novel by the University of Toronto German scholar Professor Heinz Wetzel, focuses on the Greek uprising and the War of Independence against the Turkish occupation and on the astonishing degree of European support that is awakened in the cause of freedom.

"Wetzel succeeds in shedding new light on this fascinating historical episode by mediating with sophisticated detail and complexity, by capturing tensions of idealism and realism that mirror broader developments in German literature and thought from the 18th to 19th century. Wetzel conducted the research on his topic in archives and libraries for many ... Wetzel's novel is now available in an admirably elegant translation that could only have been produced by someone as qualified as Ralph Whitinger, the University of Alberta German scholar, translator and former editor of the Canadian journal of Germanic studies Seminar. Whitinger also provides an introduction to Wetzel's novel that gives a sense of the complex, cultural-political at that time."
Dr. Gisela Brinker-Gabler,
Binghamton University-SUNY

Chapter 5 - In Search of the Government

Chapter 11 - Marching On, Holding Out

2010 - Comparing How Various Nations Administer Retirement Income: Essays on Social Security
2009 - Elizabeth I’s Use of Virginity to Enhance Her Sovereignty: Managing the Image of a Sixteenth-Century Queen
2010 - CHINA’S GREATEST OPERATIC MALE ACTOR OF FEMALE ROLESDocumenting the Life and Art of Mei Lanfang, 1894-1961
>> See all our Anglo-Saxon books