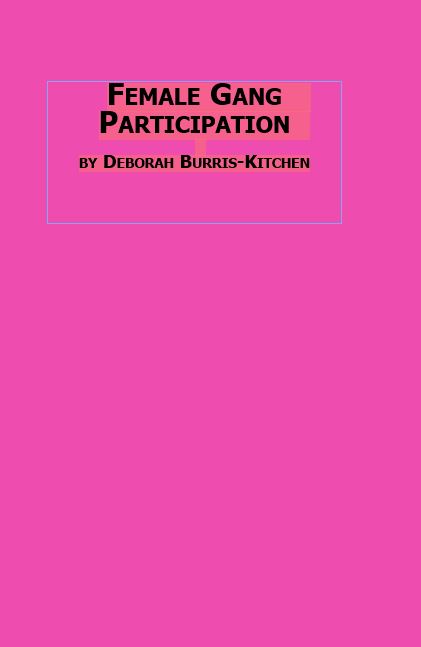 This is the only study that looks at female gang members in a small to medium size urban area, noting the lack of all-female gangs, conflicting views on the equal status of females in gender-mixed groups, continuing to investigate the level at which Black females are involved in the informal economy, and the possible time dimension aspects of Merton's innovator.

" . . . not much has been written about female gang members, certainly nothing this quality. . . . a genuine contribution to the criminological literature on a topic that should be of great interest to the general public." - Ronald C. Kramer

"The study is unique in its theoretical and methodological approaches. She takes great care to situate the current struggles of inner-city black females within the historical experiences of African-American women in the U. S. . . . . Burris-Kitchen, like the anthropologist Carol Stack, had the courage to confront the cultural, racial, class chasm and establish relationships with her informants or co-researchers. In so doing, she is able to present and interpret her data in a more authentic manner. She makes every effort to allow the respondents to have a voice and to interpret responses consistent with the issues identified by her co-researchers. The study is an excellent example of interracial and multicultural research." - Douglas V. Davidson

Chapter III: The History of Racial and Gender Opression

Chapter IV: The History of Drug Use and Drug Distribution

Chapter V: The History of Black Feminization of Poverty

Chapter VI: The Economy and Crime

Other Addiction and Recovery Books

1991 - History of the Finnish Temperance Movement: Temperance as a Civic Religion
2005 - Alcohol Abuse and Acculturation Among Puerto Ricans in the United States: A Sociological Study
2010 - HOW THE USE OF MARIJUANA WAS CRIMINALIZED AND MEDICALIZED, 1906-2004: A Foucaultian History of Legislation in America
>> See all our Addiction and Recovery books