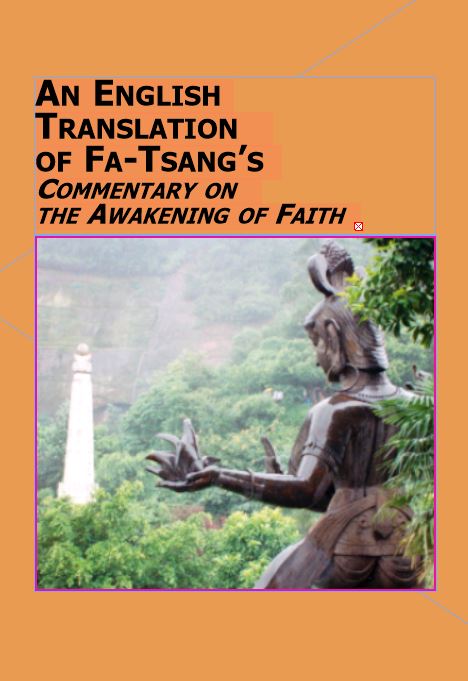 Fa-Tsang (643-712) was an important early figure in the development of Hua-yen Buddhism and is counted the Third Patriarch and first great systematizer of the school. Hua-yen doctrines have affected many other East Asian traditions and his Commentary provides a look at how various concepts associated with the emerging Chinese vijnana/tathagata-garbha tradition were developing at a key point in the tradition’s history. In addition, while Fa-Tsang’s views of the mutual interpenetration and intercontainment of events have been covered in a variety of English language materials, his views on consciousness and its various aspects have not been widely addressed. Like the Awakening of Faith, his Commentary is primarily focused on the nature of consciousness and so provides an extensive look at his perspective on the topic. Those views, we might note, predate many of the commonly known aspects of his thought such as those represented in his “Essay on the Golden Lion”.

It would be difficult to overstate the importance of the Awakening of Faith to the history of East Asian Buddhism. It has been esteemed by most of the tradition’s major schools and has accordingly had an enormous impact of the development of East Asian Buddhist thought. It is not surprising then that it has been a favorite topic for Buddhist exegetes and to date upwards of two hundred commentaries have been produced. Of all these works though, Fa-Tsang’s text has always been considered among the 2 or 3 definitive interpretations. Generations of Buddhists have consulted his work in their efforts to understand the Awakening of Faith and his interpretations have accordingly had a deep and lasting influence on the tradition.

This book presents us with, for the first time, a translation in English a key Chinese Buddhist’s interpretation of one of the most influential texts in the history of East Asian Buddhism. It not only sheds light on the development of Fa-Tsang’s thought and the Hua-Yen school, but also provides further information pertinent to the development of other schools such as T’ien-t’ai and Ch’an.

“I came to know Dirck Vorenkamp through his contributions to the Journal of Chinese Philosophy in the past years. His work on Chinese Buddhism is solid and persisting. I am pleased to know he has spent much time in making available an English translation of the Commentary on the Awakening of Faith (Ta-Ch’eng ch’i hsin lun i chi). This work is no doubt an even greater contribution to the advancement of scholarship on Chinese Buddhism and its development. I am more than pleased to write this preface.” (From the Commendatory Preface) Chung-ying Cheng, University of Hawaii at Manoa