A Parabolic Analysis of the Trial of Jesus in Mark's Gospel: How a Literary Form Shapes the Description of an Historical Event 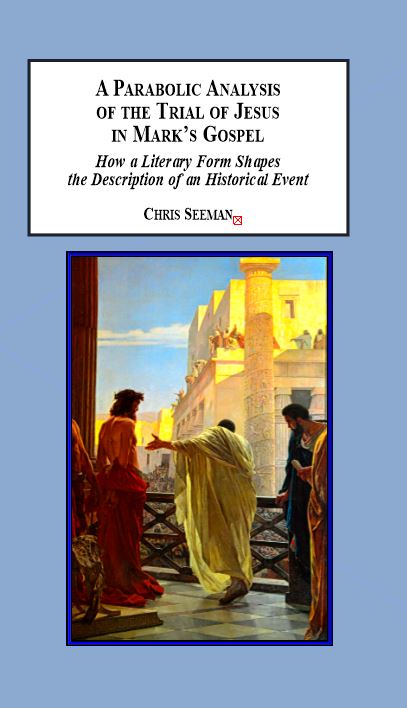 Dr. Seeman's book looks at the trial of Jesus in the Gospel of Mark (15: 1-15) and contacts the passage with the Parable of the Sower in the same Gospel. Mark's depiction of their interaction links Jesus' fate with that of the other messengers in the story -- past, present, and future. The especially close correspondence between the circumstances of Jesus' and John's deaths reveal an antithetical contrast between the coming kingdom of God and the existing regimes of Herod and Pilate.

“Seeman’s reading convincingly highlights the Gospel’s concern with the ‘fate of the messenger’ as significant to its plot and worldview. Likewise, he insightfully extends the use of the parable of the sower as a central interpretative perspective for the ‘trial’ scene in the passion narrative. His subsequent analyses of the roles of Pilate and the crowds challenge previously unsatisfactory readings of these characters that commonly ignore imperial power dynamics. … This is an illuminating study and a worthy and insightful addition to studies of Mark’s Gospel.”
Professor Warren Carter,
Texas Christian University

"The treatment of the identity of the messenger of 1:2 is also very interesting, and Seeman does not close the interpretation on a single figure: the result is intriguing. As a relay, the messenger is put out of the game but another one rises and takes his place: this helps a wide, 'symbolic' reading of the text. Also worthy of attention is the comparison between the death of John the Baptist and that of Jesus."
Dr. Paolo Rocca,
Pontifical Gregorian University

Chapter 1: The Shape of Mark

Chapter 2: The Parable of the Sower

Chapter 3: The Fate of the Messenger