WILLIAM BILLINGS, AN EARLY AMERICAN COMPOSER OF MUSIC AND HIS SEDITIOUS SONG CHESTER The Cultural Significance of Tune Names During the American Revolution 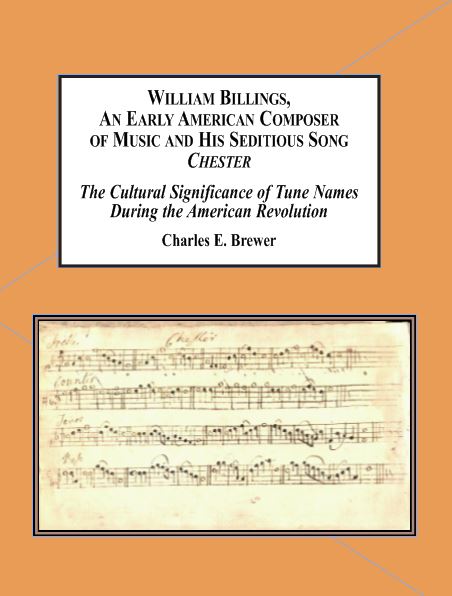 William Billing's Chester is perhaps his best known composition, though the choice of name is atypical of his usual naming practice, since the name Chester occurs rarely in sources from Colonial New England, and the significance of his significance of his evocative text that has not been examined in detail.

"Focusing on political history and context, Brewer's monograph establishes a new role for these tunebooks. Firmly anchored in their time and place of publication and authored by one who was passionately committed to the patriotic cause, they functioned as political statements and topical commentaries in addition to being musical anthologies." Dr. Nym Cooke, Eagle Hill School

"Professor Brewer is deft in handling both the music and the historical background and sources. The breadth and depth of his research in British and American history and genealogical documents is masterful and impressive. With this monograph Professor Brewer has built a convincing case in support of his thesis. He demonstrates the significance of the names of Billing's tunes and points out that arguably Billing's most well-known work, Chester, is particularly meaningful politically because it connects Britain's Civil War one-hundred years earlier with the American Revolution. Dr. Barbara Lambert, Oberlin College

"One result of this analysis is a portrait of William Billings as an American patriot, a portrait of revolutionary fervor. A second result, at least for this reader , is a presentation of evidence that Billings was a theologian of America's role in the divine plan." Professor Walter L. Moore, Florida State University

Chapter 1: A World of Tune Names

2016 - How Universities and Corporations Handicap People From Middle and Low-Income Families in Gaining Access to Executive, Political, and High Income Positions: The Exclusionary Games
2009 - Origins of a Free Press in Pre-Revolutionary Virginia. Creating a Culture of Political Dissent
2013 - An Analysis of the Ethnic and Gender Gaps in the Federal Career Senior Executive Service: The Underrepresentation of Minorities and Women (1995-2006)
>> See all our American Studies books