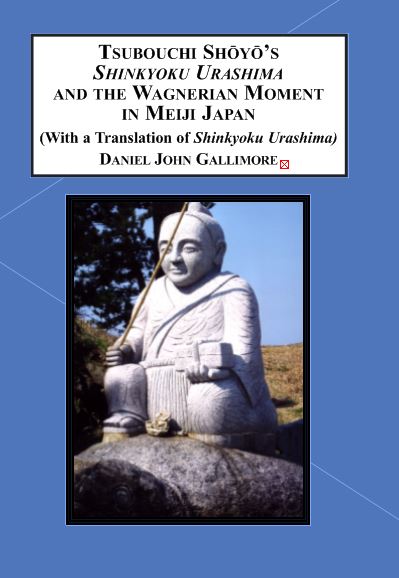 This monograph presents an introduction to Shinkyoku Urashima (1904), a so-called ‘new musical drama’ (shinkyoku) by the Japanese writer and intellectual Tsubouchi Shōyō (usually known by his pen name Shōyō). Born at the end of the feudal era in 1859, Shōyō became one of the leaders of the movement to modernize Japanese literature and drama through the encounter with Western texts and ideas, and is particularly well known for his translation of the complete Works of Shakespeare (completed between 1909 and 1927).

“This brief study of Shinkyoku Urashima shows us how much of Shoyo’s intellectual, literary and theatrical knowledge and sensibility was invested in this often underestimated work…readers will be conscious of having acquired a significantly enhanced acquaintance with this giant among the Meiji modernizers.”
Dr. Brian Powell, Emeritus Fellow,
Keble College, Oxford

“It gave me great pleasure to read this study of an important musical drama by Tsubouchi Shoyo. Though he was one of Japan’s towering intellectual figures during its period of rapid modernization during the late 19th and early 20th centuries, remarkably little has been written about this man in English…Professor Gallimore’s study is scrupulously researched and provides much fascinating insight into Shoyo and his times.”
Professor M. Cody Poulton,
Department of Pacific and Asian Studies,
University of Victoria, Canada

“The book builds firmly upon well-established historical facts, bolstered with well-translated quotes (original) from contemporary and later critics, as well as by Tsubouchi himself. Methodically, it unravels various threads that make up this complex work…it is a complex and multi-faceted examination of a particularly significant dance-drama in the history of Japenese dance, music, and theatre…”
Dr. Jonah Salz,
Ryukoku University

"... the primary focus of the book is rightfully on the translation, and the introduction offers context to the reader that is crucial but easily overlooked in a script that is encountered only through the written word. Shoyo's play utilized traditional Japanese music from a wide variety of genres to duplicate Wagner's operatic techniques. The significance of these musical choices can be opaque to readers not versed in both opera and the Japanese musical tradition.

Because of this, Gallimore's translation brings a text into the reach of a new audience that aids in understanding Shoyo's intellectual development and the development of modern Japanese literature, and it is a welcome addition to English language Shoyo scholarship and teaching."
Dr. Aragorn Quinn,
University of Wisconsin, Milwaukee

Forward by Dr. Brian Powell
Preface
Acknowledgements
Chronology
One: To the Ocean’s Depths
Romantic beginnings
The Meiji intellectual
Shoyo’s ‘bottomless lake’
The Urashima legend
Critical reception and performance history
Two: The Romance of the Genres
Shoyo and the Japanese theatre
The Wagnerian moment
The new musical drama
Shoyo’s ‘Folk’
‘A higher, nobler element’
Three: A Japanese Tannhäuser
Venusberg, Horai and the Dragon Palace
Otohime and Urashima: A meeting of hearts
The Shoyo leitmotif
Nagauta and the ode to the sea
Conclusion: Towards romantic realism
Translation: Shinkyoku Urashima
Bibliography
Index

1993 - Japan's Policy in Africa
1996 - A Comparative Study of Extrinsic and Intrinsic Work Values of Employees in the United States and Japan
2007 - The Autobiographical Narrative in Modern Japan: A Study of Kasai Zenzō, a Shi-Shōsetsu Writer
>> See all our Japan & Japanese Studies books