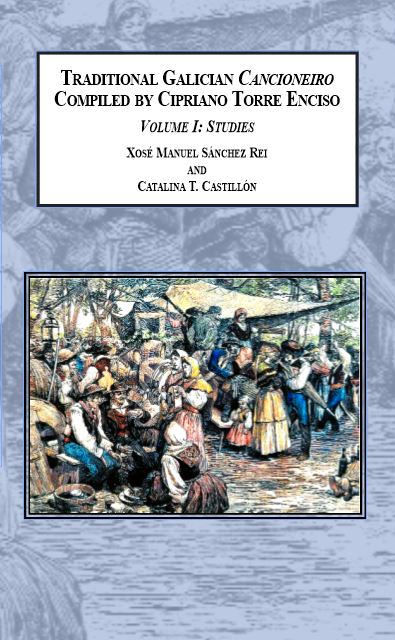 This songbook contains almost 7,000 traditional Galician poems and, only for this, it can be said that this collection of traditional poetry is one of the most important of the 20th century. The poems were compiled by Cipriano Torre Enciso during the second half of that century. They were copied at family parties, traditional markets, traditional gatherings, songbooks, etc. Preliminary studies prepared by Drs. Xose Manuel Sanchez Rei and Catalina T. Castillion develop literary, cultural, linguistic and historical characteristics of all these traditional texts. Both works serve to highlight the enormous value of those poems.

"The collection contains more than 7,000 songs, all thoroughly revised, edited and, where possible, analyzed in comparison with other, previously-published versions.Thus, from a merely quantitative point of view the work constitutes one of the most significant compendia of its kind compiled in the twentieth century. This edition is also of major importance from a qualitative standpoint, not only in the way that it deals with Torre Enciso's original collection, but in terms of the scholarly discussion which accompanies the songs, itself marking a substantial advance in the analysis of popular Galician song."
Dr. Maria Jesus Lorenzo-Modia,
Universidade da Coruna

"The use of development of the Galician language was subject to banning and suppression by Spanish Dictator General Francisco Franco, who ruled from 1939-1975, and this minority culture had also been suppressed by authorities in earlier centuries. Moreover, much of the Galician cultural and linguistic heritage belongs, even today, to oral tradition, making it vulnerable to loss and possibly even extinction without methodical scholarly efforts to preserve it. Now thanks to the publication of Traditional Galician Cancioneiro by the Edwin Mellen Press, an important artifact of Galician culture is available to scholars and lovers of tradition and authentic folk poetry."
Dr. Pamela S. Saur,
Lamar University

The Cancioneiro by Torre Enciso: A Cultural and Linguistic Approach by Xose Manuel Sanchez Rei

Abbreviations used in the Texts

1997 - Our Air/nuestro Aire Volume 2: Clamor/clamor
2022 - The Escape of Jews from Nazi Germany Through Spain, 1940-1944: Tracing the Stages of Their Dangerous Passage
2000 - An Anthology of the Spanish Sonnet in English Verse Translation, Volume One: The Golden Age
>> See all our Spain/Spanish books