The Tragedy of Richard II, Part One: A Newly Authenticated Play by Shakespeare, Vol. 1 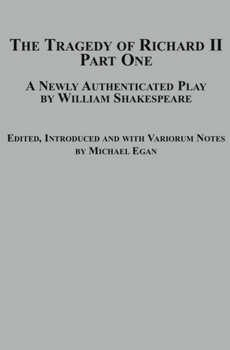 Awarded the Adele Mellen Prize for Distinguished Contribution to Scholarship

This new multi-volume edition of an anonymous Elizabethan history play that has intrigued Shakespeare scholars for more than a century. Using modern computer softwares to degrain and magnify the text, Michael Egan resolves many of the transcription difficulties presented by the handwritten manuscript to produce the most authoritative edition yet available. A set of Text and Variorum Notes meticulously records the variant readings of previous editors and provides relevant citations from contemporary sources and other analytic comments to clarify the play's meanings, concerns and thematic preoccupations. Among other features of this edition are an original conclusion in the Elizabethan manner (some lines of the manuscript's final scene are missing), a book-length Introduction proving that Shakespeare wrote the play, and a l00-page supplement detailing over 1,600 echoes and parallels with the Collected Works. Other sections examine 1 Richard II 's textual history from 1870–present, outline its historical background and include selections from the writings of those critics who have discussed the work in detail. This work is a must for every Shakespearean collection.

“ ... All Shakespeare scholars have reason to be grateful to [Michael Egan] for not only resolving a long-standing authorship puzzle, but adding another rich and glittering history play to the Shakespeare canon.” – The Shakespeare Oxford Newsletter, Winter 2006, p. 20

“Some years ago I proposed that the rediscovery of Shakespeare's so called 'Lost Years' 1582-92 might yield perhaps twenty new and unacknowledged dramas, even at the author's leisurely composition rate of two per annum. Dr. Michael Egan's edition and analysis of the anonymous Elizabethan manuscript Woodstock (restoring its early title, Richard II, Part One) is a positive step in that direction. Together with the recent recovery of Edward III, and possibly other apocryphal works, Dr. Egan's text and discussion bid fair to transform the field of Shakespeare studies. We have an overlooked Shakespeare drama to consider, complementary to his history plays and of sufficient quality to justify critical attention. Dr. Egan demonstrates that Shakespeare's story is presented with energetic subtlety, drawing on (or perhaps developing for the first time) devices and techniques he later brought to fruition in the second tetralogy and his great tragedies. Among them are typical imageries, structural doublings and the play-within-the-play. We also find early versions of some famous figures, including Falstaff, Dogberry, Osric and others. That Shakespeare's was the originating hand is confirmed by an astonishing set of parallel lines and phrases, scrupulously itemised, which permit little doubt of their mutual authorship. Among the recognisably Shakespearean themes are contrasts between court and village life, the subtle admixture of comedy and tragedy, and the rise of the new-fashioned legal forms so excoriated by John of Gaunt on his death-bed, 'Thy state of law is bond-slave to the law,' (Richard II, I II.i.114). But as Everitt remarks, Shakespeare's early histories are couched anachronistically in terms of Tudor property law, a topic with which he was especially concerned. Among Egan's most persuasive insights is the degree to which Richard II, Part One reflects this interest. Little justice can be done in so brief a preface to so thorough a discussion. I can say only that I am impressed with the author's industry, critical intelligence and capacity to master such an array of readings, information and ideas.” – (from the Foreword) Eric Sams, Author of The Real Shakespeare

“Readers of this work will very likely praise these distinguished volumes containing superb research and elegant commentary about one of the literary world's most intriguing subjects: the discovery of a new play by William Shakespeare.” – Professor Ned Williams, Brigham Young University-Hawaii

“Dr. Michael Egan's closely-argued research on the Shakespearean canon will have a powerful impact on contemporary scholarship. This long-meditated project brings with it a host of rich new insights, and fresh possibilities for understanding Shakespeare's practise as a writer and collaborator.” – Professor Eric Homberger, University of East Anglia

“Dr. Michael Egan's book makes a compelling argument regarding the authorship of I Richard II, a manuscript discovered in the British Library in London. Egan's text is well-written and masterfully researched. It is a must-read for scholars interested in Shakespeare.” – Professor Ann Stamp Miller, TransPacific Hawaii College

"The definitive work on the Woodstock play is Michael Egan's four volume "The Tragedy of Richard II, Part One: A Newly Authenticated Play by William Shakespeare," published with extensive commentary by The Edwin Mellen Press (2006). A fine summary and review of Egan's masterpiece is "Richard II. 1: Another Early History Play Is Added to the Shakespeare Canon," by Ramon Jimenez, Shakespeare Oxford Society Newsletter, reprinted online in Shakespeare Fellowship. Egan's avowed purpose is the demonstration in over 2,100 pages of painstaking scholarship that the anonymous Woodstock is the real McCoy, one of the very first plays by the author of Hamlet and Macbeth. "The core of Egan's case for Shakespeare's authorship," writes Jimenez, "is the swarm of images, thoughts, words, phrases, and rhetorical and dramatic devices found in Thomas of Woodstock, of which there is 'some sort of echo, parallel or strong resemblance in Shakespeare's plays. There is no Shakespeare play without them, and Egan cites more than 1600." (Jimenez, online source)

Jimenez then adds this Parthian shot: "It is hard to imagine that there will be much more to be written about Thomas of Woodstock than what Egan has included in these 2100 pages."

Acknowledgements
Foreword
General Introduction
Critical History
Dating the Play and MS
The Dramatist as Historian
Shakespeare’s Plays and Poems
The Golden Metamorphosis
Background and Synopsis
The Tragedy of Richard the Second, Part One