The Ethnic Cleansing and Genocide of Christians from the Middle East: The Islamic War Against Christianity 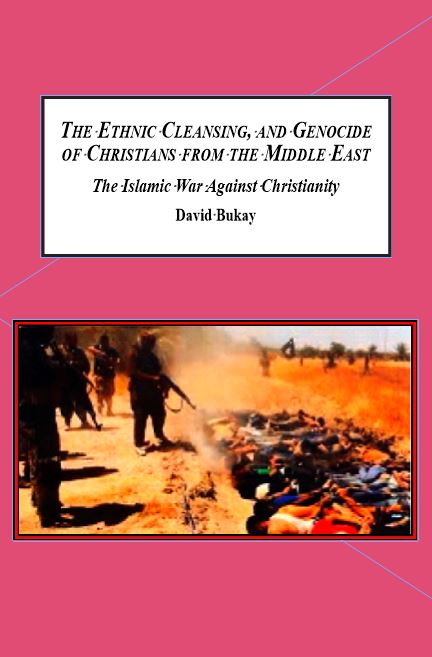 The research found in this book proves, ethnic cleansing has also many other aspects, like expropriating others' history, scientific knowledge, values, even identity; mass slavery of groups and nationals from the seventh century on; coercing Muslim primitive barbarian values on the Free World by terrorism, intimidation, sophisticated propaganda, sabotaging its infrastructure, and mass-immigration; and removing physical and cultural evidence of the targeted groups by demolishing and desecrating their monuments, cemeteries, and places of worship.

"’Ethnic Cleansing’ is the deliberate and systematic removal of a racial, political, or cultural groups from a geographical area. It is a purposeful policy designed to remove by violent and terror-inspiring means population of another ethnic or religious group with the intent of making it ethnically homogeneous or under religious hatred. … The Report of the UN Commission of Experts also stated that the coercive practices used to remove the civilian population includes: murder, torture, arbitrary arrest and detention, extrajudicial executions, rape and sexual assaults, severe physical injury to civilians, confinement of civilian population in ghetto areas, forcible removal, displacement and deportation of civilian population, deliberate military attacks or threats of attacks on civilians and civilian areas, use of civilians as human shields, destruction of property, robbery of personal property, attacks on hospitals, medical personnel, and locations with the Red Cross/Red Crescent emblem, among others. The Commission of Experts added that these practices can ‘… constitute crimes against humanity and can be assimilated to specific war crimes. Furthermore, such acts could also fall within the meaning of the Genocide Convention.’"