Sikh Names: The History and the Process of Naming Persons in the Sikh Tradition 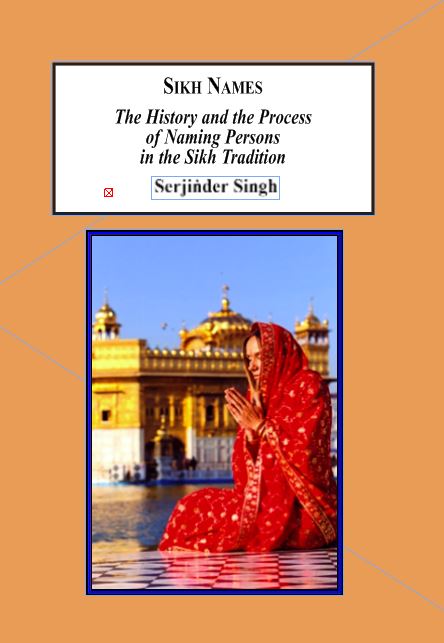 This monograph traces the evolution of the naming process within the Sikh religion over the past five-hundred years in the context of social and political changes in the Sikh community. Initially, Sikh names weren't any different from those of their original religious communities.
The study includes a comprehensive lists of names compiled from historical and literary records and also from different genealogical records of ruling families and other historical sources.

"... the study undertaken by the author is an uncommon work. While coining new Sikh names it unfolds traditional as well as creative and innovative genius at work. It also underlines cultural legacy that the Sikhs inherited, besides figuring out nomenclature change. ... this treatise is a product of painstaking efforts on his part for which he deserves out sincere appreciation." Dr. Balwant Singh Dhillon, Guru Nanak Dev University

" ... the subject of this study is very unique and fascinating, it is hoped to add a new dimension to the Sikh Studies being carried in India and abroad. It clearly brings out the socio cultural and historical factors which have considerably influenced the naming practices among the Sikhs of mainstream Sikhism during the period of over five centuries. Significantly, the author of the [book], though not a professionally trained historian, has clearly shown his understanding and familiarity with over a dozen major periods of Sikh historical developments which witnessed the changing processes and patterns of coining new names among Sikhs and the Sikh Diaspora. " Prof. Sulakhan Singh Mann, Guru Nanak Dev University

Rise of the Khalsa

Rise and Fall of Lahore Kingdom

1998 - Proposing a New Scientific Method and Biosocial Theory to Explain Western Society
2003 - Issues of Gender, Race, and Class in the Norwegian Missionary Society in Nineteenth-Century Norway and Madagascar
1995 - Violence and Conflict in the Politics and Society of Modern France
>> See all our Sociology books