Poe's Eureka, Erasmus Darwin, and Discourses of Radical Science in Britain and America, 1770--1850 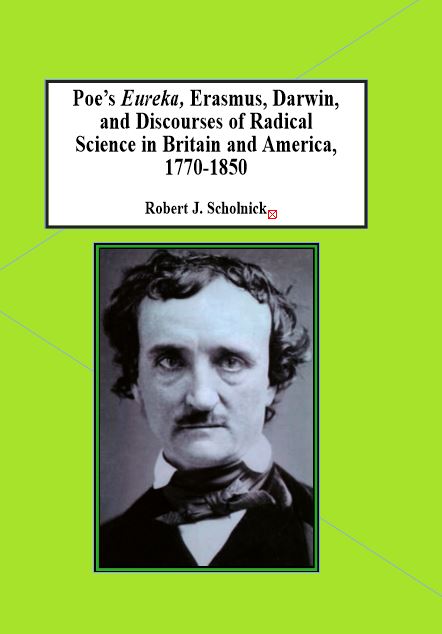 Dr. Scholnick argues that Poe recognized that 'science" was not a unitary endeavor. Like Shelley, who was influenced by Erasmus Darwin and Hawthorne among others, Poe understood that science was inherently political, and he wrote critically of the famous Bridgewater Treatises, which were commissioned in Britain in the 1830s to demonstrate God's continuing providence. The radical tradition enabled Poe to separate himself from the dominant assumptions of natural theology of his time about such matters as Special Creation and the Fixity of Species.

" and the writer fittingly acknowledges the bravery of those who articulated materialistic explanations of the nature of the Universe, defying religious and political orthodoxy. Poe himself endured critical attack and lost at least one friend because of his bold treatise
The present disquisition offers an engaging and learned genealogy of Poe's cosmological text. Scholnick shows that even as Poe was attempting to consider all time and all space, he was very much a man of his time and his place."
Professor Richard Kopley,
Penn State DuBois

"... is also particularly useful in pointing out the ways that the line between the poetic and the scientific was much fuzzier in this era and that Poe' usage of science was inherently poetic and that his sense of the poetic was bound up in scientific and cosmological questions."
Dr. Stephen Rachman,
Michigan State University

I - From 'Vulture' to Vehicle: Poe and Cosmic Exploration

V - Humboldt and Poe: "The Phenomena of Cosmos"

2008 - Influence of Music on American Literature Since 1890. A History of Aesthetic Counterpoint
1993 - American Travel Narratives as a Literary Genre From 1542-1832 the Art of a Perpetual Journey
1999 - Historical Survey of the Southern Review 1935-1942. Radical Conservatism
>> See all our Literature - American Literature books