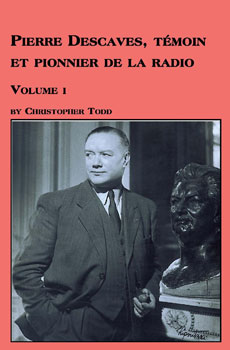 2001 Research Award by the Comité d'Histoire de la Radiodiffusion
This two-volume work describes for the first time the rich and varied career of a man who was at the center of cultural life in Paris after WWII as president of the Société des Gens de lettres and as general administrator of the Comédie français, and who was above all intimately associated with French radio in various ways at an important moment in its development from 1926 to 1942 and 1944 to 1966. The son of a man of letters, and himself the author of several novels and literary memoirs, Descaves brought to his radio criticism aesthetic values. His analysis of his ideas and of those of his contemporaries allows us to appreciate the qualities and faults of different kinds of programs and to see how people wanted to defend the cultural mission of radio as a popular art form before the triumph of television. Descaves also wrote important radio plays, and a large part of the book examines the attempt to create a form of theater entirely distinct from that of the stage. In French.

“Descaves, as well as being clearly a substantial intellectual figure in his own right, seems to offer an excellent angle on all the sectorial issues of programme style, genres and techniques, taste and cultural expectation, institutional organisation and political relationships, which underlie this key period of mass communication in France. . . . in addition to the first ‘intellectual biography’ of Descaves. . . [Todd] would seem to have written what promises to be a standard reference work on French radio in the pre- and early ORTF era.” – Andrew Rothwell

“Given Todd’s wide-ranging concerns, the work will be of significance not only to those who are studying the specific area of radio, but also to those whose interests lie in literary history, theatre history and literary criticism, as well as to those who have a broader interest in the cultural and political landscape of mid-twentieth-century France. It would seem to me that many University libraries would be asked to buy Todd’s work and that it would prove to be an invaluable and rare resource for scholars, teachers and students of modern French cultural history.” – Brian Rigby

Other France/French: All Subjects Books