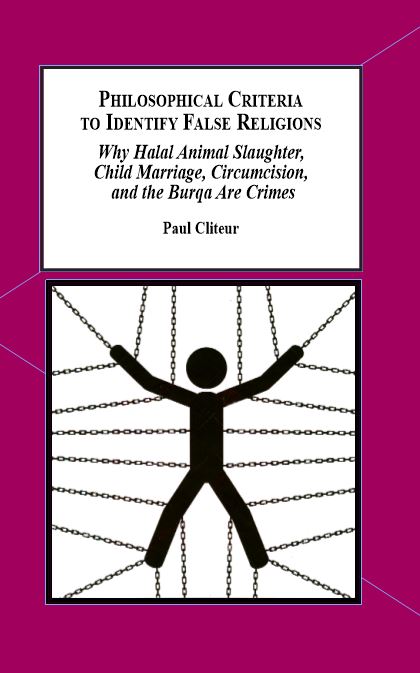 This book is about the question of what to do with immoral religious practices in a legal context. There are some (so-called) religious practices that many or at least some people consider immoral such as withholding inoculation to children, male and female circumcision, and unstunned ritual slaughter of animals. Dr. Cliteur looks into ways to redefine freedom of religion with its abolition to make use practices illegal. Published in softcover only.

"Many claim that offensive or even immoral acts are legitimate if they are expressions of religious belief. They claim that restricting such acts are infringements of the right to act freely practice one's religion.
But, however free exercise of religion may be, it must be subordinate to the criminal laws of the country, passed with reference to actions regarded by general consent as properly the subjects of punitive legislation."
Professor Charles A. Beard,
Columbia University

Chapter 1: What is Religion?

Chapter 6: Four Guiding Principles for the Interpretation of "Religion"

1981 - Irony of Apartheid. The Struggle for National Independence of Afrikaner Calvinism Against British Imperialism
1997 - Roots of United States Foreign Policy Toward Apartheid South Africa, 1969-1985
2016 - Development of the Poetic Epic: Classic, Comic, Cyclic, Romantic, Satanic an Invited Lecture at the University of Toronto
>> See all our Apartheid books