PRINTING, LITERACY AND EDUCATION IN 18TH CENTURY IRELAND Why the Irish Speak English 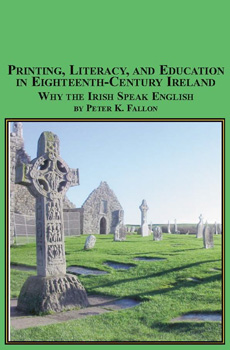 Winner of the 2007 Marshall McLuhan Award for Outstanding Book in the Field of Media Ecology
This book details the history of the spread of printing and literacy in eighteenth century Ireland. In addition to being a historical survey, it is also a study, in the “media ecological” vein, that explores what happens when a new technology is introduced to a given culture. This work answers three key questions: first, why did print technology take so long (300 years after Gutenberg) to become a cultural influence in Ireland; second, why was there an “explosion” of printing and presses in Ireland between 1750 and 1800 and finally, why, when a printing industry had been established, was almost the entire output of printed literature in English rather than the Irish language?

“During an age when we are inundated by new communication media, the importance of understanding their potential influences is paramount. Books about new and emerging technologies of communication are numerous and common. What is not so common, however, are books that direct our attention to the complex social, cultural, economic, and political dynamics that usually unfold when a new medium of communication enters a culture. To provide much needed perspective, it can be instructive to turn to history for insight and explanation. Peter Fallon's book is unique in that it offers this type of perspective and, thus, enriches our understanding of the underlying causes and potential consequences of communication shifts in cultures and societies.

Dr. Fallon's primary focus is on early modern Ireland, a period when two distinct, but conflicting, cultures wrestled with differing notions of social, economic and political institutions, structures, and organization. He is particularly interested in the media that competed within the culture to convey and uphold these divergent ideas. The primary mode of communication at the start of the eighteenth century was oral. By the end of the century, a print culture predominated. There was also a profound shift during the period from traditional Gaelic custom to English common law. The rise of social literacy during the critical period between 1750 and 1800 and its influence on the forms and purposes of education provide the specific context for Dr. Fallon's study. He examines the cultural conditions leading to this change, particularly the consequences of eighteenth-century political decision-making on the structure and function of education. His goal is to analyze and explain the dynamics of this interaction, in particular the relationship among individuals, social institutions, and the symbol systems shaped by the communication media. The results are an astute study and a significant contribution to orality-literacy scholarship.

Although several scholars have investigated the juxtaposition or clash of two languages in a culture, Dr. Fallon's study of the impact of the English language on native Gaelic tongue is unique in that he describes and analyzes the consequences of the clash on social institutions. He considers the social and cultural conditions that existed in Ireland and at the time of the transition and then investigates the ways that the characteristics and structure of print technologies reconfigured fundamental forms and functions of social organization. As a result of his study, Dr. Fallon offers a fresh perspective on the long history of Irish struggles. His focus on the function of communication media within Irish culture during the eighteenth century offers a new interpretation and filler explanation of the rise of social literacy in early modern Ireland.” – (from the Commendatory Preface) Karen B. Brown, Associate Professor, Graduate School of Library

2015 - THE SECULARIZATION OF DEATH IN SCOTLAND, 1815-1900: How the Funeral Industry Displaced the Church as Custodian of the Dead (A Study of Private Cemeteries, Public Crematoria, and Bereavement Practices in Edinburgh)
1997 - A Bilingual Anthology of Contemporary Spanish Poetry: The Generation of 1970
2007 - Form and Function of Ritual Dialogue in the Marriage Traditions of Celtic-Language Cultures
>> See all our Cultural Studies books