Oldest British Prose Literature. The Compilation of the Four Branches of the Mabinogi 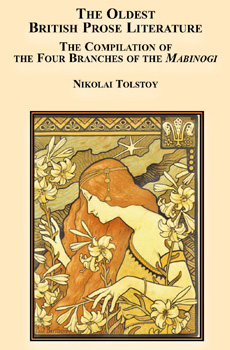 Runner Up for the Wales Book of the Year for 2009
Establishes the chronology and provenance of the early mediæval tales known today as the Four Branches of the Mabinogi. Although they have been justly described as ‘fundamentally the stories of the old Brittonic gods from whom the leading Welsh dynasties claimed descent’, which makes their principal subject-matter archaic and in principle timeless, Tolstoy shows that often seemingly incongruous and contradictory passages reflect details of historical events in Britain and Ireland during the first two decades of the eleventh century.

“[Tolstoy] now addresses the best-known and best-loved work of mediaeval Welsh prose, The Four Branches of the Mabinogi. This text has recently been the object of renewed scholarly interest, especially with regard to questions of date and authorship. By contrast, the concern of earlier scholars to disentangle and make sense of the elements of British or ‘Celtic’ myth in the stories has fallen out of fashion, partly as a result of an increased concentration on the texts as they stand rather than with what might or might not lie behind them, and partly through a distrust of the whole methodology of the older school of mythological criticism, as exemplified by the sometimes undisciplined speculations of the late R. S. Loomis. Tolstoy, by contrast, argues afresh for the recognition of the mythical elements in the Four Branches, not with the intention of treating those elements as the real subject of interest, of which the texts are to be seen merely as a late and garbled version, but as a means of recreating the intellectual context in which the texts were composed. All in all, though the author does not presume to offer a definitive resolution of the problem, the book is to be welcomed as a valuable new approach to the question of the date and context of the composition of the Four Branches of the Mabinogi.” – Nicolas Jacobs, Jesus College, Oxford

"In this highly readable analysis, which emerged from the fireside tales he had read to his daughter, Nikolai Tolstoy brings eleventh-century Britain mysteriously to life. . . . As Nicholas Jacobs notes in his foreword, Tolstoy’s interpretation is that the mythical narrative provided a trans-historical paradigm into which recent events could be fitted. This would mean that were Manawydan’s promise exacted from Llwyd that Dyfed should be free from alien oppression to be viewed as a trans-historical paradigm, then the Third Branch cannot have been composed after the Anglo-Norman annexation of Dyfed in 1093. If Tolstoy’s conclusion on the Mabinogi’s dating is of interest to the scholar, this charming book is also a page-turner for the lay reader.” – Trevor Mostyn, the Times Literary Supplement

"For a contemporary cultural commentator who is not a a Celticist, Professor Tolstoy delivers a cogent and convincing argument of great scope and vision - evidently immensely researched ... It could be considered, nevertheless, as a fresh approach, useful for future scholarship on the Four Branches." -- Prof. Aled Llyr Warwick, Besprechungen

Foreword by Nicolas Jacobs
Preface
1. The Four Branches of the Mabingogi
2. Primary Dating Considerations
3. The Evidence of Branwen
4. Branwen and Early Mediæval Ireland
5. Bendigeidfran, Brían Bóromha, and the Vikings
6. The Evidence of Manawydan
7. History and the Heroic Tale
8. The Author and His Milieu: A Reassessment
Bibliography
Index