Feminist Campaigns for Birth Control and Abortion Rights in Britain 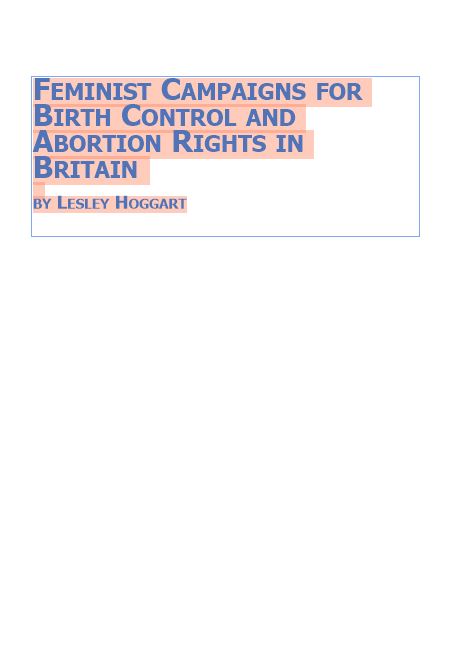 Book has important implications for contemporary feminist politics. It contributes to a growing body of work on the relationship between feminist theory, feminist campaigning activity and policy change.

“Hoggart’s detailed account of the debates and actions of the 1920s and 1970s provides relevant historical insight into the processes that surround decisions made at key points in time, which in themselves set the parameters for many of the discussions that continue today. This scholarly work makes a key contribution also to wider debates about how women’s concerns can best be promoted in contemporary politics. Tensions within the feminist movement and changes within this movement over time are part of the story told in this compelling account…. an important contribution to the understanding of the social politics of reproductive control in Britain in the 20th century and a thoughtful and thoroughly researched study which illuminates wider issues in politics and social policy more generally.” – Susanne MacGregor, Middlesex University

“This is a well-written, carefully researched and thoughtfully argued book which makes an important contribution to gender politics and to feminist theory and history. An in-depth analysis of two feminist campaigns occurring in Britain half a century apart is used as the basis for an exploration of the extent to which political activists are able to influence social policy…. The book substantially increases our knowledge of the specific events covered. It also provides new insights into the processes of political negotiation and the role of social movements as catalysts for social change. It brings a fresh clarity of thought to a number of key debates within feminism…. Providing a refreshingly new perspective on an issue of central importance to the feminist movement across a number of countries, this book will be widely welcomed by students, activists and policy makers with an interest in reproductive rights.” – Jeanne Gregery, Professor of Gender Studies

"This is a book about feminist struggles and feminist dilemmas. It deals with issues that inescapably face all activists when pursuing social change: how to present a case, how to transform a feminist ideology into effective political action, whether to work within existing structures (e.g. government or parliament) or to pursue extra parliamentary action, who to form alliances with, and how to deal with the compromises that such coalitions involve. Hoggart argues that there are always 'tensions between pragmatic concessions made in order to promote, or protect, limited gains for women, and more idealistic struggles to pursue radical goals of social transformation' (2003: 17-18). This book represents a detailed examination of two case studies of feminist activism to explore this and to understand what lessons can be learned for the future. The book takes a historical approach to social policy -with social policy conceived in the broadest possible terms. Hoggart argues that a historical perspective on feminist struggles is often lacking in contemporary feminist debates, and this can lead us to underestimate women's agency and also to continually reinvent the wheel in each new struggle ... One of the strengths of the book is in the meticulous detail of Hoggart's studies, derived from careful archival work. By the end of the book, she has furnished us with a very good understanding of each organization and how it faced the various dilemmas of political engagement, showing us not just the differences between the organizations, but also the conflicts and compromises within each one." - Feminism & Psychology