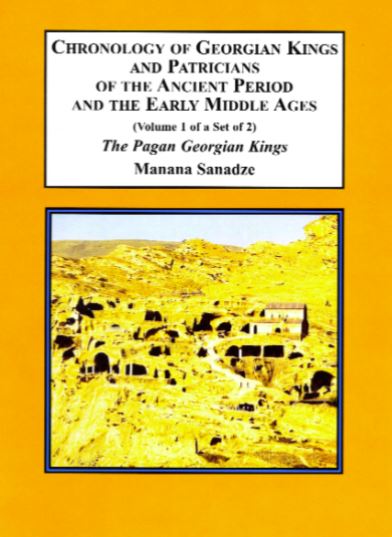 The primary value of the manuscript is that it establishes the chronology, sequence and descent of Georgian kings and erismtavaris. It is also important that the author identifies and determines numerous geographical place and toponyms. Volume 2 continues by describing the historical period from the second half of the sixth century to the 780 A.D. Georgia was ruled by the Christian Sassanid dynasty, Persia-Byzantine, and the Perozian and Bakurian Dynasties.

“The research of Dr. Manana Sanadze is marked with courage. She never refrains from proving the groundlessness of opinions and stereotypes firmly established in Georgian and world historiography However, in such cases she usually refers to evidence preserved in historical sources. Therefore, her conclusions are always well corroborated and persuasive.”
-Prof. Bezhan Khorava,
University of Georgia

Section I: Pre-Kingship Stories in "The Georgian Chronicles" and their Chronology

Chapter I: The Arrival of Kartli of: "Turks Expelled by Kai Khosrow", "Huns Exiled by Chaldeans" and "Jews Taken Hostage by Nebuchadnezzar"

Chapter II: The Issue of Genealogy of Armenians, Georgians and Other Caucasian Nations in the Historiography of the Middle Ages

Chapter III: The Battle of Targamosids with Nebrot and Their Victory

Chapter V: Period from Pharnavaz to the Division of Kartli into Two Kingdoms

Chapter VII: The Kingdom of Kartli in the Kingship of Pharsman II the Valiant up to Amazasp II's Reign