Christian Soldier/Martyrs of the Roman Empire, The First Century to the Fourth Century A.D. (Including a Compendium of Over 200 Soldier/Martyrs with Brief Biographies for Each 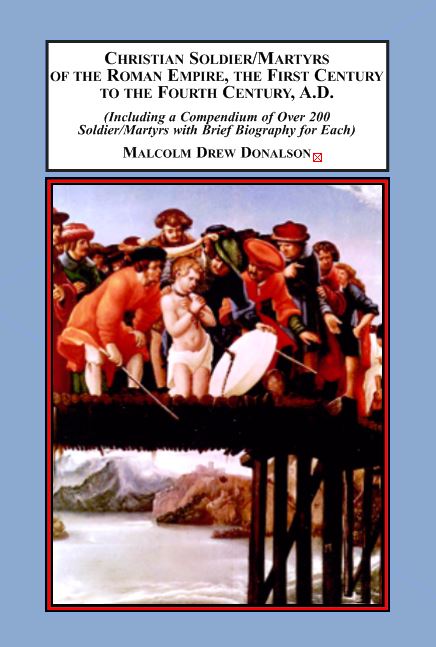 This work addresses the subject of Roman soldiers who, due to difficult circumstances, ended their lives as Christian martyrs. It looks at as a whole at Roman soldiers , whose martyrdoms insured that they were chief agents in the diffusion of the Christian faith throughout the Roman world, exemplifying Tertullian's famous reference to the blood of martyrs as the seed of Christians. Perhaps paradoxically, while these soldiers' martyrdoms provided moving testimony at the of dreadful events, it was their commemoration by the Church that was such a powerful factor in the continuing Christianization of late Roman life and culture.

"... is excellent piece of scholarship, and one that is particularly relevant today, given the recent martyrdom of Christians in the Middle East and elsewhere in the world. This book is essential reading for anyone interested in the history of the early Church, especially the period of the Roman persecutions, and for understanding how the blood of martyrs led an insignificant sect to become the dominant religion in the Roman Empire." Dr. Nicholas Stevenson, Fisher Road Special School

"... explores a vastly underexplored subject -- the martyrdom of Roman soldiers for their practice of Christianity. Roman soldiers are usually (and correctly) portrayed as those persecuting Christians, but Dr. Donalson proves that there were a significant number of Roman soldiers before the end of the Fourth Century who not only accepted Christianity against the prevailing norms of both their society and their profession, but were also willing to die for these beliefs." Professor Thomas J. Ward, Jr., Spring Hill College

Part I: Introducing The Soldier Martyrs

Roman Rank and Title Among the Soldier-Martyrs

Remarks on the Persecution

How Soldiers were Apprehended

A Note on Sources

Part II: Compendium of the Soldier-Martyrs of the Roman Empire from the First Through the Fourth Century A.D.

Other Christianity: All Topics Books

2014 - Praxis-Oriented Theology and Spirituality in the Sermons of Edward Schillebeeckx
2014 - Narrative Rhetorical Analysis of Six Hollywood Films About Christ, 1912-2004: The Romanticization of Sacrificial Death
2019 - A Spirituality of Infancy, Childhood, and Puberty: What Can we do to Help our Children Love God
>> See all our Christianity: All Topics books