NAGARJUNA IN CHINA: A Translation of the Middle Treatise 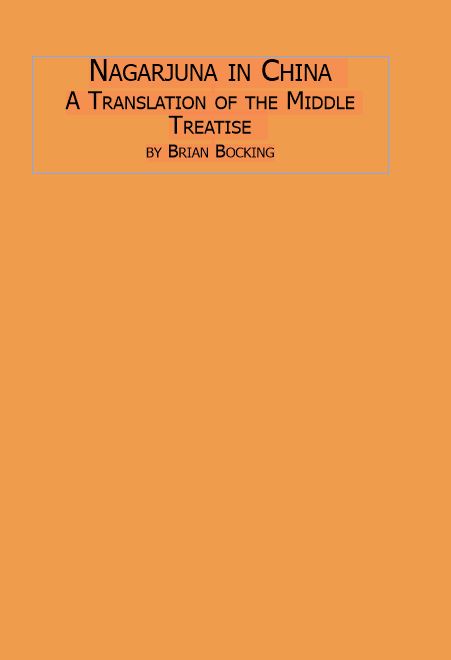 The great Buddhist philosopher Nagarjuna's writings on emptiness (sunyata) have profoundly influenced Indian, Tibetan and Chinese Buddhism for nearly 2000 years. The central statement of his thought is found in his Middle Stanzas. The Middle Treatise (T. 1564) here translated in full into English for the first time, is Kumarajiva's Chinese version of Nagarjuna's Middle Stanzas with the commentary attributed to the monk 'Blue Eyes' (Pingala, Vimalaksa) that exists only in the Chinese Buddhist canon. The introductory chapters set the Treatise in context within the Sino-Japanese Buddhist tradition, introduce Madhyamika ideas found in the Middle Treatise, and provide a detailed commentary on the Treatise for the modern reader, discussing each chapter and clarifying the argument of the Treatise. The Translation of all 27 chapters of the Middle Treatise forms the heart of the work, while the extensive Notes to the translation contain more discussion and specialized information including many of the Chinese terms found in the Treatise. The authorship of the Middle Treatise is considered in an Appendix. This is a significant addition to the small but growing body of translated texts of Sino-Japanese Buddhism, a tradition that remains relatively under-represented in modern Buddhist studies.

"Bocking's discreet notation clarifies some points neglected by Garfield, such as the sramana-fruits. . . . he aims rather to isolate the specifically Chinese identity of the Middle Treatise, overlooked by Nagarjuna scholars. His deliberately plain translation, as far as I have checked it, is lucid and faithful." - Japanese Journal of Religious Studies

"The translator has deliberately avoided the temptation to use the distorting lenses of the Sanskrit and Tibetan versions of the verses and commentaries on them, in order to convey the Chinese sense of the text, for the Zhonglun exists only in Chinese and was meant for a Chinese readership. This translation is significant also because the Zhonglun was influentional in East Asian tradition and was interpreted by leading Chinese Buddhist thinkers such as Jizang. The main philosophical and religious themes of the treatise are outlined and some of its weak points mentioned. . . . All are placed in a religious context, which means that the work was not simply an exercise in logical negation. The analysis is clear and the translation accurate." - Revue Bibliographie de Sinologie

Appendix: The Problem of Authorship of the Middle Treatise