Restoration of Architecture and Works of Art in the Eighteenth Century: The Vocabulary, Theory, and Achievements of Luigi Vanvitelli 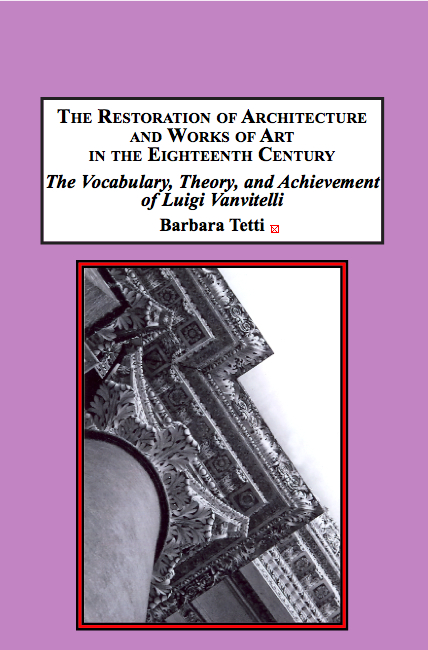 This is the first comprehensive study, translated into English, of the written repertoire, both published and un-published, of architect Luigi Vanvitelli and his approach to restoration and renewal in antiquities preservation. Vanvitelli’s remarkable written record covers the intellectual, theoretical and ideological etymology of scholars in Eighteenth-century Europe with regard to the ‘restoration’ and preservation process.

“In order to understand the meaning connected with the ‘notion of restoration’ in the XVIII century … particular attention has been focused to the definition of the terms and phrases used to describe, in that age, the various modes that differentiated the actions carried on existing buildings. Dr. Tetti revisits the sources – published and unpublished- and through a direct reading of the architectures, proved by accurate measurements, reconsiders the architect Luigi Vanvitelli as a “restorer” and focuses the attention on the autograph writings and lexicon used by him.”
-Professor Maria Piera Sette,
Dipartimento di Storia, Disengo e Restauro dell’Architettura,
Rome, Italy

“This book is an original and complete research covering a period throughout the professional development and the writings of architect Vanvitelli…[it’s] most remarkable thing is the tremendous effort done by Dr. Tetti compiling, transcribing and translating into English a huge amount of Vanvitelli’s handwritten letters found in many different archives.”
-Professor Tania Robles Ballesteros,
Complutense University of Madrid

“This book, based on important archival research, immediately highlights Vanvitelli as a ‘restorer’, and his use of the term ‘restoration’ which defines an operating mode distinct from the ‘new’ production. There are valuable concepts and indications that Dr. Tetti deduces from an accurate reading of the copious autograph repertoire by Vanvitelli…[it] organically reconstructs the architectural, cultural, social and political history of the Eighteenth century.”
-Professor Maria Grazia Turco,
Sapienza Università di Roma

Abstract / Foreword / Personal Preface
Acknowledgments
Introductory Chapter
1. Reflection on Past and Restoration in XVIII Century; Roman Cultural Spirit within the European
1.1 Philosophy, Science, Religion, and Antiquity
1.2 Archaeological discoveries and religious significances: a new perception of the testimonies of the past.
1.3 Monuments Preservation and Directions for Restoration in Rome.
2. Luigi Vanvitelli Restorer: Thought and Work on Existing Architectures
2.1 Renaissance, Baroque and Classical Roman Architecture: Vanvitelli’s Antiquarian Interests and Involvement in Current Debates
2.2 The lexicon: ‘restore’ versus ‘renew’.
2.2.1 Restoration’ Meaning in XVII and SVIII Century Vocabularies and Dictionaries.
2.2.2 Relationship between the practice and its definitions in Vanvitelli’s autograph sources: some exemplar instances
3. Food for Thought
3.1 Roman Chartreuse or Diocletian’s baths Restoration? Words and Senses of the Restoration by Vanvitelli
Appendixes
Biographical review
Vanvitelli’s work on existing buildings review
Bibliography
Index of Names
Index of Places