A. M. Klein, the Father of Canadian Jewish Literature Essays in the Poetics of Humanistic Politics 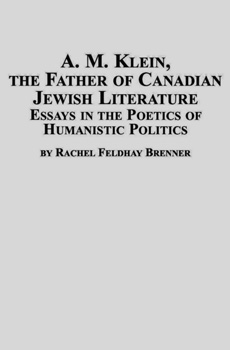 Winner of the 1992 Jewish Book Committee Award in recognition of excellence in literary scholarship.

Studies the Russian-born Canadian-Jewish poet and author of Hitleriad, A. M. Klein. Examines Klein's representations of the post-war humanist crisis. Examines the extent to which Klein's Canadian Jewish identity informs the poet's quest for the ethical restitution of the world at large, and contests the accepted critical view of Klein as a Jewish poet unable to escape the parochialism of the Canadian literary scene. Outlines the poetics of Klein's quest for language and form which would sustain the meaningfulness of art in the face of devastating historical reality.

"Brenner offers strong readings of both the poems and of The Second Scroll, in pursuit of the context within which Klein saw fit to make use of Talmudic, Yiddish, and Zionist culture, along with that of Francophone Montreal, and the tradition of English poetry that he held in such high esteem. Brenner focuses our attention on Klein's wide-ranging, seemingly scattershot and polyglot style, to show how it derived from a particular cultural attitude that was expressed through intertextual play. . . . She avoids the kind of anatomy of reference and detail to which the novel is often treated, and presents a thoroughgoing critique of its confrontation with the difficulties of writing about the Holocaust. . . .Brenner reminds that Klein was an early and brilliant investigator of this question." - Canadian Literature

"Any reader who wants to know Klein well needs to form a clear understanding of the kind of Jew he was. It is in this area, I think, that Brenner's book is most helpful . . . . what the author enables us to see (though she does not explicitly put it in just this light herself) is that although Klein was a somewhat exceptional figure in his own day, he was in fact a forerunner of what has now turned out to be mainstream North American Judaism." - Usher Caplan

"In this handsome monograph on A.M. Klein, Rachel Feldhay Brenner succeeds admirably in updating the earlier criticism of M.W. Steinberg and Miriam Waddington. Meshing Klein's fundamental humanism with some of her own postmodern concerns, Brenner successfully broaches the two nearly incompatible concepts in a clear, balanced, and compassionate account of the poet's life and work. . . . Later critics on Klein will have to contend with Brenner's book even as she has contested the positions of others. . . . . This book will be of particular interest to students of Jewish studies and Canadian literature." - Michael Greenstein

1984 - Jewish People in Christian Preaching
2014 - How the early Church Fathers Misinterpreted the Hebrew Bible to Promote Hostility toward the Jewish People: A Study in “Blaming the Victim”
1992 - Philo-Semitic and Anti-Jewish Attitudes in Post-Holocaust Poland
>> See all our Jewish Studies books